Family of man killed by Chicago police wants officer fired; ‘This officer is on the street?’

‘I miss my son daily,’ says Angela Wade-Brown, Turrell Brown’s mother. ‘I wake up missing my son, I go to bed missing my son — and then to hear that this officer is on the street?’ 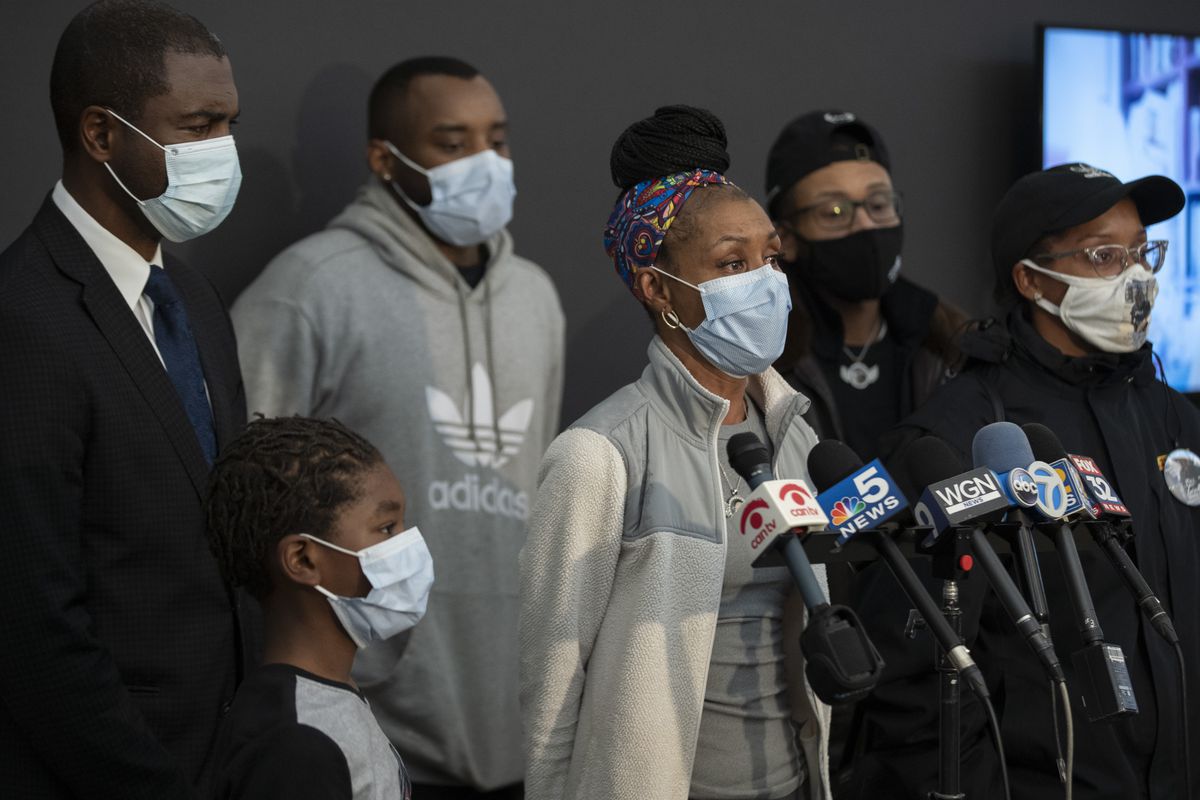 Angela Wade-Brown, mother of Turrell Brown, who was killed by police in September during a domestic disturbance, at a Friday news conference. Brian Rich/Sun-Times

The family of a man killed by Chicago police last month while responding to a domestic disturbance call is demanding the city to terminate the officer who fired their gun and should be prosecuted for the shooting.

“I want to see accountability,” Angela Wade-Brown said Friday during a news conference. “I miss my son daily, I wake up missing my son, I go to bed missing my

son —and then to hear that this officer is on the street?”

Wade-Brown’s son, 28-year-old Turrell Brown, was killed by Chicago police on the morning of Sept. 19 in the 6500 block of South Harvard Avenue, according to the Civilian Office of Police Accountability. The visit was in response to a woman who said Turrell Brown hit her in the face and was armed with a knife.

Body camera video released by COPA showed a woman telling officers her boyfriend had hit her chest and face. She had asked officers to remove the man from her apartment, according to the video.

COPA is still investigating that officer’s use of force.

Wade-Brown said her son holding a knife at one point during the encounter doesn’t justify the officer shooting him. She said the video doesn’t show her son acting erratic, but instead shows him talking calmly and moving with caution. She wished police had done more to deescalate the situation.

Lebryant Brown, the man’s brother, said officers had other options at their disposal to use before reaching for their guns.

“He just went into the apartment and executed my brother,” Lebryant Brown said.

“If this situation didn’t cause for him to use a Taser, then I don’t know what situation would, because he was just trying to close the door and [the officer] just pulled out his gun and killed my brother,” Lebryant Brown said. “We should not have to protest to get justice. The police should be held to the same laws that everybody else in America is held to.”

State Rep. La Shawn Ford, D-Chicago, joined the grieving family at the news conference and echoed their calls for some sort of accountability in the fatal encounter. The family, who lives in his district, had reached out to him, pleading for his help.

“On Sept. 19, their loved one was shot and killed by a Chicago police [officer] and to this day, they still haven’t received any mental health support from the city of Chicago,” Ford said. “Today the family would like to be heard.”

Kaleah Brown, Turrell Brown’s sister, cried as she said police benefited from a double standard of justice; they can just go home after taking a person’s life.

“If this had been a situation of Turrell Brown murdering the Chicago police [officer], he would have been in jail today. They would not have allowed him to go home with his family, to continue his job,” Kaleah Brown said. “My heart is broken. My brother will never come back again ... because the Chicago police did this.”