A Special Type of Incompetence 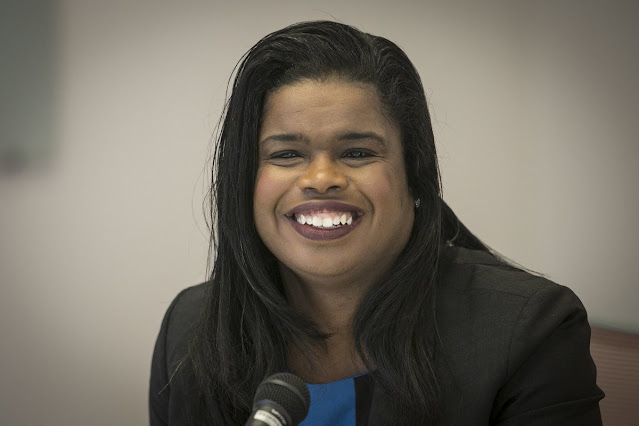 Threw her 1st assistant right under the bus. That should be a lesson for everyone.

One of Cook County State’s Attorney Kim Foxx’s top prosecutors was forced to resign this week after an internal investigation revealed she did not review an in-court statement a fellow prosecutor made about 13-year-old Adam Toledo holding a gun before he was shot and killed by Chicago police in Little Village.

Adam was holding a gun on March 29 but within less than a second, he threw it on the ground, turned around and put his hands up in the air when an officer fired, video footage released by the Civilian Office of Police Accountability shows.

First Assistant State’s Attorney Jennifer Coleman “traditionally” would have reviewed any high-profile proffer read in court by her underlings but she didn’t go over the one prosecutor James Murphy read in court on April 10 as he detailed the allegations against 21-year-old Ruben Roman, Foxx told the Chicago Sun-Times Wednesday.

Roman was arrested at the scene of Adam’s shooting, which Murphy described as part of Roman’s bond hearing. Roman faces charges of reckless discharge of a firearm, unlawful use of a weapon, child endangerment and violating probation.

“The officer tells [Adam] to drop it as [Adam] turns towards the officer. [Adam] has a gun in his right hand,” Murphy had told Judge Susana Ortiz last month.

“The officer fires one shot at [Adam], striking him in the chest. The gun that [Adam] was holding landed against the fence a few feet away.”

The proffer did not mention Adam throwing his weapon or him not having it in his hand when he was shot.

A source told the Sun-Times that the child endangerment charge wasn’t approved by Coleman until hours before Roman’s bond hearing, leaving Murphy little time to adjust his statement, which required detailing Adam’s shooting to make a case for that charge.

Five days after Roman’s bond hearing — and hours before COPA released footage of Adam’s shooting — Foxx approved a statement, saying Murphy “failed to fully inform himself before speaking in court,” and described the omission about the weapon as an error.

On Wednesday, the state’s attorney’s office said Murphy “did not intend to give the impression that Adam Toledo was holding a gun when shot” and the “investigation revealed that the language the attorney used in court was inartful, leaving an unintended impression.”

Without mentioning Coleman’s forced resignation, the state’s attorney’s office in its statement also said its investigation “revealed a breakdown of communication in how information was shared, which ultimately did not get elevated to State’s Attorney Foxx before, nor in a timely manner following, the bond court hearing.”

Coleman, who was appointed first assistant in December, was asked to resign for failing to read the proffer and not showing the proper urgency required to correct the record after, a second source said.

“She was essentially fired,” that source said.

Foxx, who told staff about Coleman’s firing in an internal email, said “had that proffer been vetted by superiors . . . I don’t think we would have been in this position.”

Foxx said she was informed by email about Roman’s proffer that Saturday, but she said that no one flagged it for her to read that weekend when she may not be as responsive on email compared to a weekday.

“I wasn’t given the opportunity to read [the proffer] beforehand because those who would have been in the position to give it to me hadn’t notified me, hadn’t called me, hadn’t said . . . ‘You need to read this,’ ” Foxx said. “The ability [for me] to weigh in didn’t happen on this day.”

Murphy, who had been placed on paid leave while the internal investigation took place, will be resuming his duties in the office.

Murphy had not been given all the materials the state’s attorney’s office obtained from COPA, the city oversight agency that investigates officer-involved shootings, Foxx said.

The office’s Law Enforcement Accountability Division had the information from COPA but it wasn’t shared with the Felony Review Unit, which only had information from police. LEAD is “walled off” from other units and from Foxx until its investigation is complete.

Still Coleman, who reports directly to Foxx and oversees both units, should have reviewed Murphy’s proffer with her knowledge of the materials available to both units, Foxx said.

“I am not directly involved in the investigation of LEAD until they complete their initial work,” Foxx said. “It is by my own design. I think what has been evident in cases involving officer-involved shootings, is they’ve become very emotionally and politically charged.

“Politics should not impact how we review these cases. That was the intent of the design. ... I have the final say on whether charges are filed or not.”

While Foxx said she was told “very early on” about the content in the videos capturing Adam’s shooting, she did not watch them until April 12. The top prosecutor did not say why it took three days after that for her office to comment on the discrepancy.

Foxx wouldn’t say if the officer who shot Adam would be charged and said the matter is still under review.

All assistant state’s attorneys will now have to undergo new training, and new policies and procedures will be put in place as a result of the investigation.