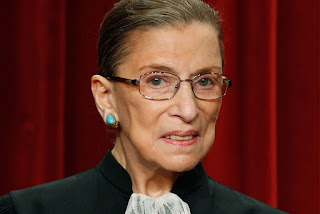 Ruth Bader Ginsburg, the Supreme Court justice who was as pioneering as she was brash, died on Friday, the court said. She was 87.

The court said Ginsburg, a lifelong champion of women's rights and a fierce advocate for gender equality, died "surrounded by her family at her home in Washington, D.C., due to complications of metastatic pancreas cancer."

Chief Justice John Roberts said: "Our Nation has lost a jurist of historic stature. We at the Supreme Court have lost a cherished colleague. Today we mourn, but with confidence that future generations will remember Ruth Bader Ginsburg as we knew

her — a tireless and resolute champion of justice.”

Despite her diminutive stature, Ginsburg was larger than life, both on and off the bench. Viewed as a feminist icon, she broke countless barriers, never shying away from making contentious comments along the way — with everything from her high court opinions to her octogenarian workout routines, earning her the nickname the "Notorious R.B.G." by her rabid fan base.

Diagnosed with cancer four times, Ginsburg had had numerous health scares, including several recent hospitalizations. Her death will open a pivotal seat on the court less than 50 days before the election.

NPR reported that in her final days, Ginsburg dictated a statement to her granddaughter Clara Spera declaring, "My most fervent wish is that I will not be replaced until a new president is installed."

Senate Majority Leader Mitch McConnell said Friday night he has no intention of waiting and will put forward whoever President Donald Trump nominates.

"President Trump’s nominee will receive a vote on the floor of the United States Senate," McConnell said in a statement.