City takes new steps to deter gatherings at Montrose Beach after Lightfoot slams ‘reckless’ lakefront party, yet mask were
not required at her rooftop city hall birthday party and she refuses to self-quarantine after one of her favorite aldermen came down with the Covid-19 See Shave's article on chicago-clown-mayor-lori-lightfoot.html 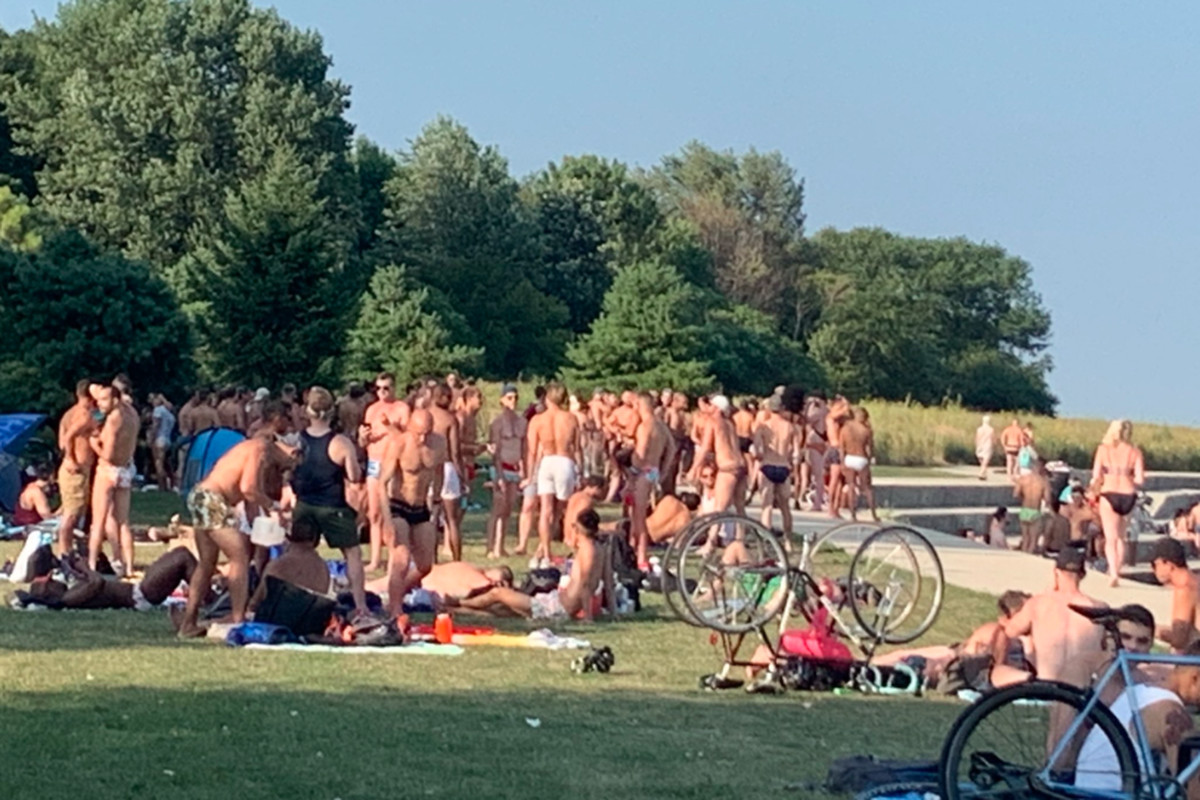 Mayor Lori Lightfoot on Saturday denounced a large gathering at Montrose Beach and later went to check it out for herself. Twitter

After Mayor Lori Lightfoot slammed revelers for ignoring city rules and social distancing guidelines and crashed their party Saturday at Montrose Beach, officials quickly installed new fencing and limited vehicle access to the area to prevent others from gathering on the closed-off lakefront.

On Sunday, Chicago Park District spokeswoman Michele Lemons said the fence along the lakeshore
was specifically put in place Saturday night “to deter large gathering like those observed yesterday.”

The move came after Lightfoot tweeted a stark warning Saturday evening alongside a photo that showed dozens of people congregating on a grassy patch near the water.


“It’s called a pandemic, people,” Lightfoot wrote. “This reckless behavior on Montrose Beach is what will cause us to shut down the parks and lakefront. Don’t make us take steps backwards.”


A short time later, Lightfoot again took to Twitter and announced she had personally “stopped by the gathering.”

During a news conference Sunday, Gov. J.B. Pritzker called the image of the lakefront gathering “horrifying.”

“It’s a demonstration of what we’ve seen in the numbers, which is that young people are not taking this as seriously as they should. And unfortunately, we see that the numbers of young people ... contracting COVID-19 have gone way up,” Pritzker said, lauding Lightfoot and other mayors who he said “have done the right thing” in the wake of the pandemic.

A Chicago police spokesman said the department wasn’t notified of any citations issued during Saturday’s incident. On Sunday morning, a police SUV was parked near the entryway to Montrose Harbor, where a sign reading “PARK CLOSED” sat amid a makeshift checkpoint. Vehicles attempting to drive through the area were required to show a valid harbor identification card, while others were turned away. An employee for the Office of Emergency Management and Communications said drivers without a pass could park their cars elsewhere and walk to the lakefront area.

“While the lakefront trail is open, Chicago’s beaches and parkland east of Lake Shore Drive remain closed under the Chicago Department of Public Health’s executive order,” said Lemons. “The fencing will remain in place indefinitely to remind the public of the restrictions implemented as part of the city’s ongoing COVID response plan.”

But as a stream of bicyclists and joggers zoomed around the parkland west of the lakefront, dozens of people hung out on the beach undeterred. Some basked in the sun, while a few swimmers waded in the lake to beat the sweltering mid-morning heat.

Unlike Saturday’s controversial gathering, the beachgoers appeared to stick within small groups and keep their distance from one another. 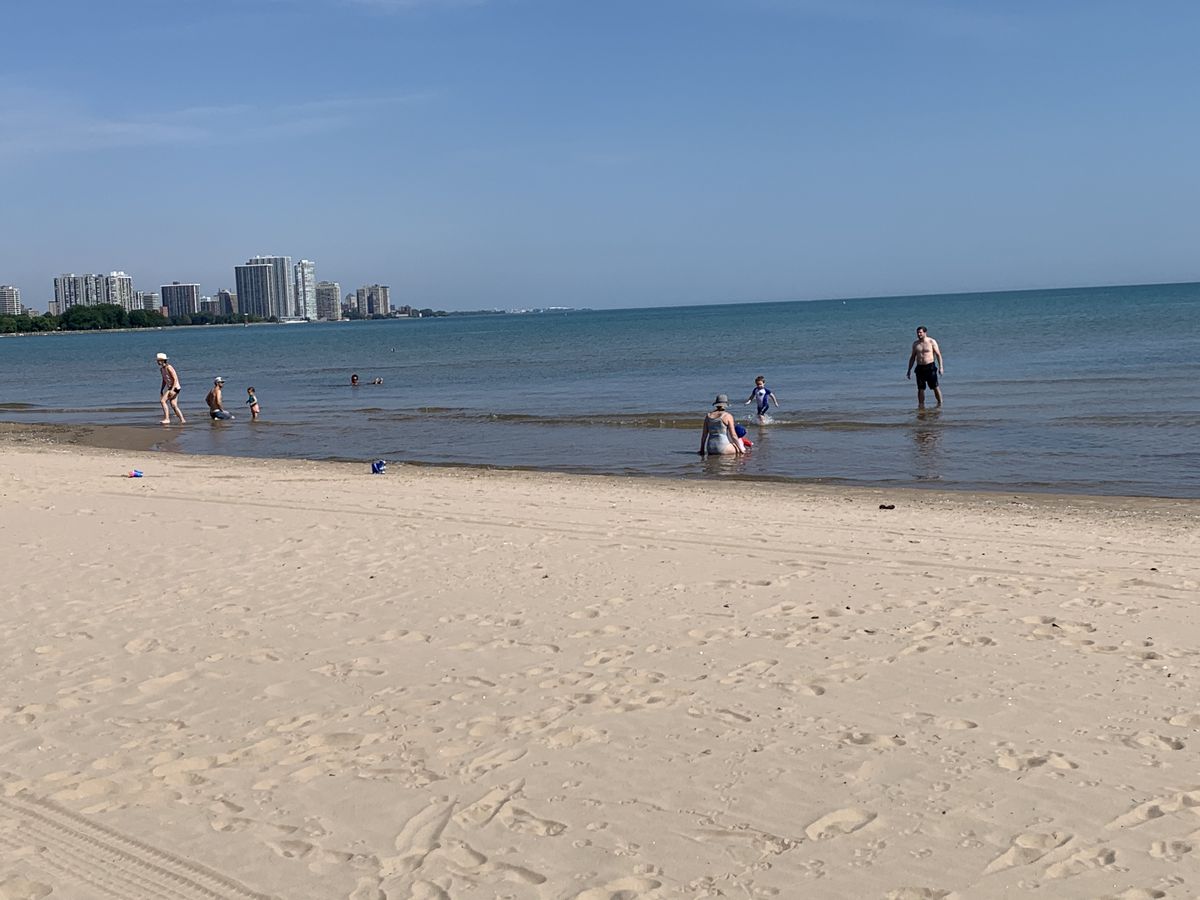 Beachgoers defy city rules and take a dip in Lake Michigan at Montrose Beach during the COVID-19 pandemic on Aug. 9, 2020. Tom Schuba/Sun-Times

Fabio Gadaiol, who works in the financial sector and moved to Chicago from Brazil, tossed a Frisbee with a friend as he chastised young people for gathering publicly in large groups.

“You need to know the balance,” Gadaiol said, complaining that some people are ignoring how their risky actions could impact others.

“It’s not about you. You live in a society.” 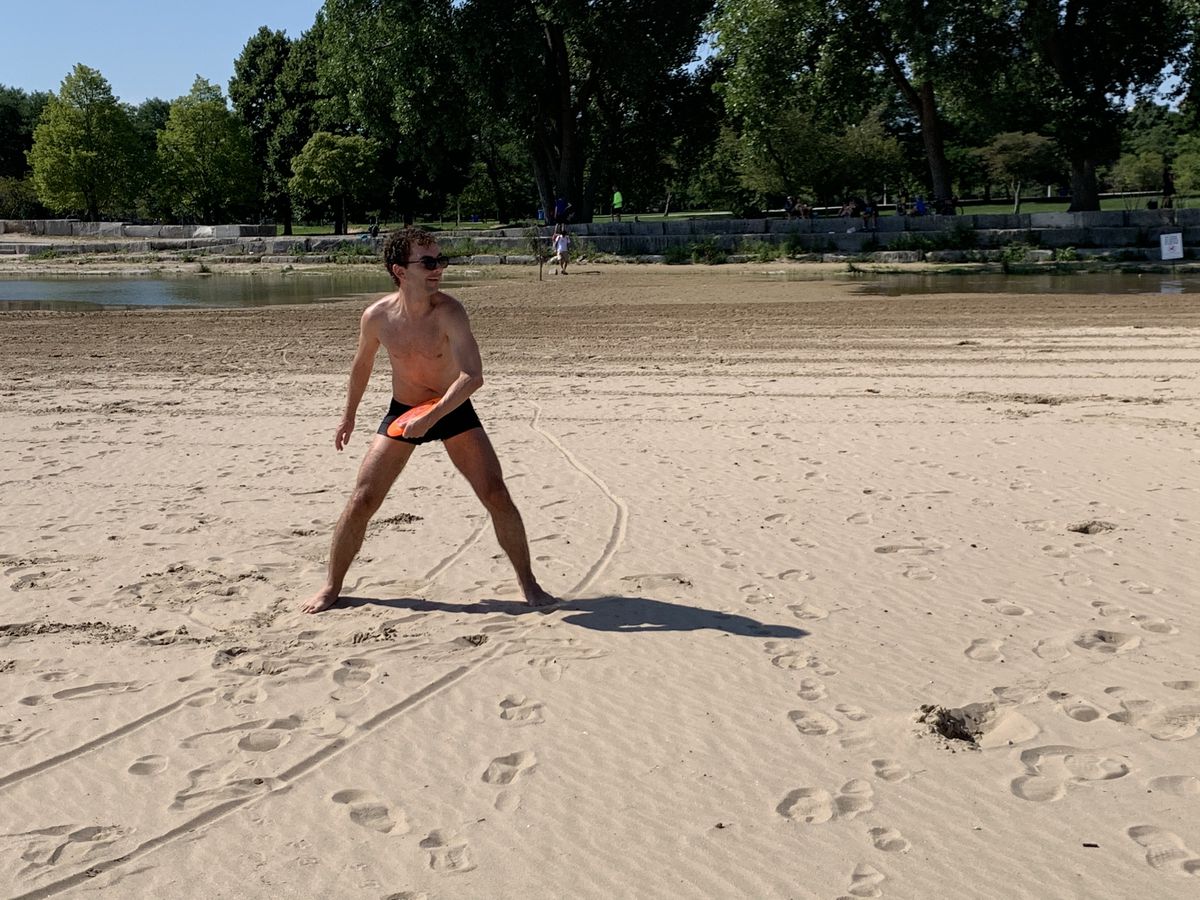