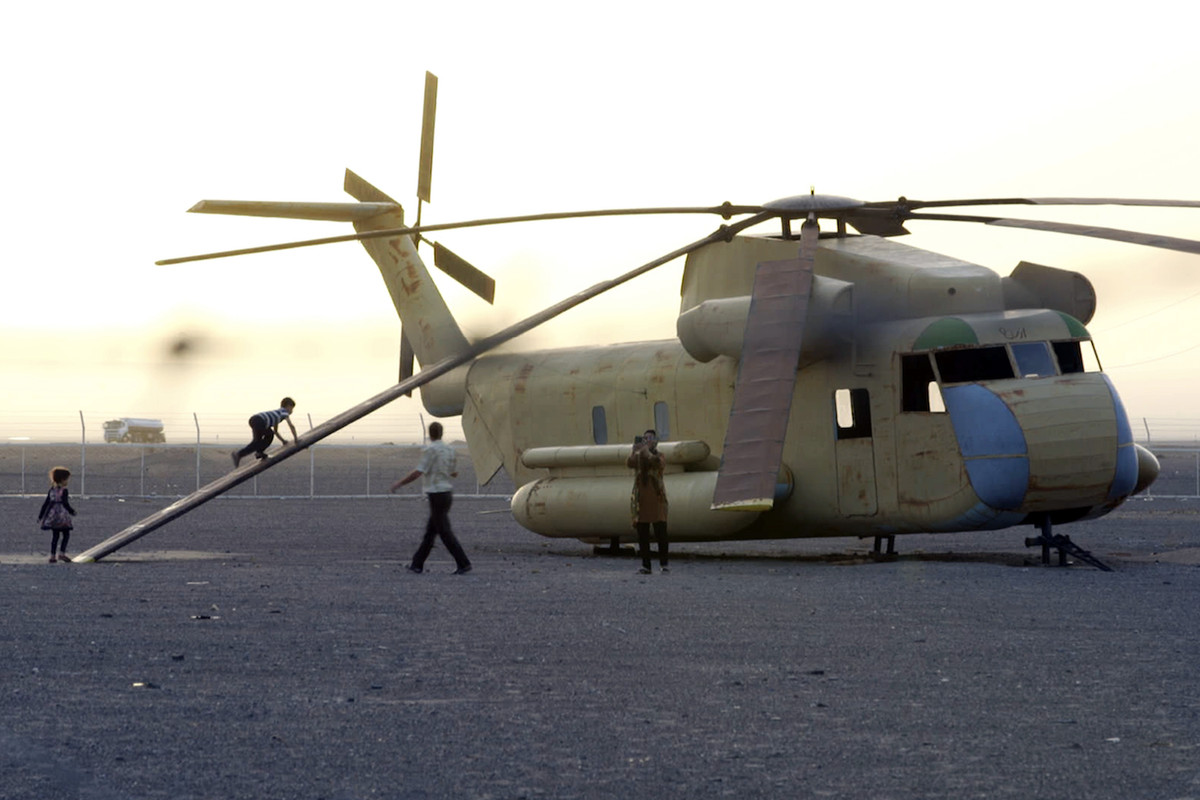 In a scene from “Desert One,” tourists visit the site where a U.S. helicopter crashed during a failed 1980 rescue mission in Iran. Cabin Creek Films

“Do you have any reports on the helicopters’ location?”

“They have passed the point of no return.” – Never-before-heard telephone conversation between President Jimmy Carter and Joint Chiefs Chairman Gen. David Jones as the American military swooped in on Iran in an effort to rescue 52 hostages on April 24, 1980.

You feel a hurricane of emotions watching Barbara Kopple’s brilliant and searing documentary “Desert One,” which arrives some 40 years after Operation Eagle Claw, one of the most tragic failed military missions in American history.

You’re awestruck by the bravery and dedication of the Armed Forces personnel who risked and, in some cases, gave their lives in an effort to pull off a daring rescue mission.

You’re frustrated by the hesitancy and inaction of President Jimmy Carter, who stubbornly resisted using military force for months as the crisis dragged on and 52 Americans were held prisoner in the embassy in Tehran.

You’re impressed by the resilience and strength of the former hostages who are interviewed for the documentary.

And you’re sickened to learn the anniversary of the deadly crash that claimed eight American lives is celebrated in Iran, and the site of the crash itself is a tourist attraction.

At 74, Barbara Kopple, a two-time Oscar winner (for “Harlan County USA” and “American Dream”), is still at the top of her game, delivering another Academy Award contender featuring archival footage, judicious use of animated re-creations and interviews with former president Jimmy Carter, former vice-president Walter Mondale, retired U.S. Army Military Intelligence Col. James Q. Roberts and legendary anchor-reporter Ted Koppel, among others. After giving us a brief but thorough background on American-Iranian relations in the 20th century, “Desert One” laser-focuses on the Iran hostage crisis, which was ignited on Nov. 4, 1979, when a gang of Iranian college students took over the U.S. Embassy in Tehran as Iran demanded the U.S. return the overthrown Shah of Iran, who was in New York for cancer treatment.

An American populace already disenchanted with the Carter presidency (especially after he gave his infamous “malaise” speech in the summer of 1979 and blamed the American people for having a “crisis in confidence”) became increasingly frustrated as Carter verbally condemned the act of terrorism but took no action. Even though Carter was a highly accomplished Navy veteran, “he had a great antipathy to the use of military force,” says Mondale in an interview for the film.

Finally, some five months into the crisis, Carter approved Operation Eagle Claw, a risky and ill-conceived mission. The plan: Special Ops Forces would invade a remote patch of Iranian territory via transport aircraft and helicopter, landing at a rallying point called Desert One. From there, under the cover of night, a squadron of eight helicopters would set out for Tehran, land at the American embassy, bust in and rescue the hostages.

Astonishingly, there were no dry runs. “Before the actual mission,” says Col. Roberts, “there was never a full-on dress rehearsal.” Perhaps if there had been one, the architects of the plan would have realized how many obstacles they were facing. 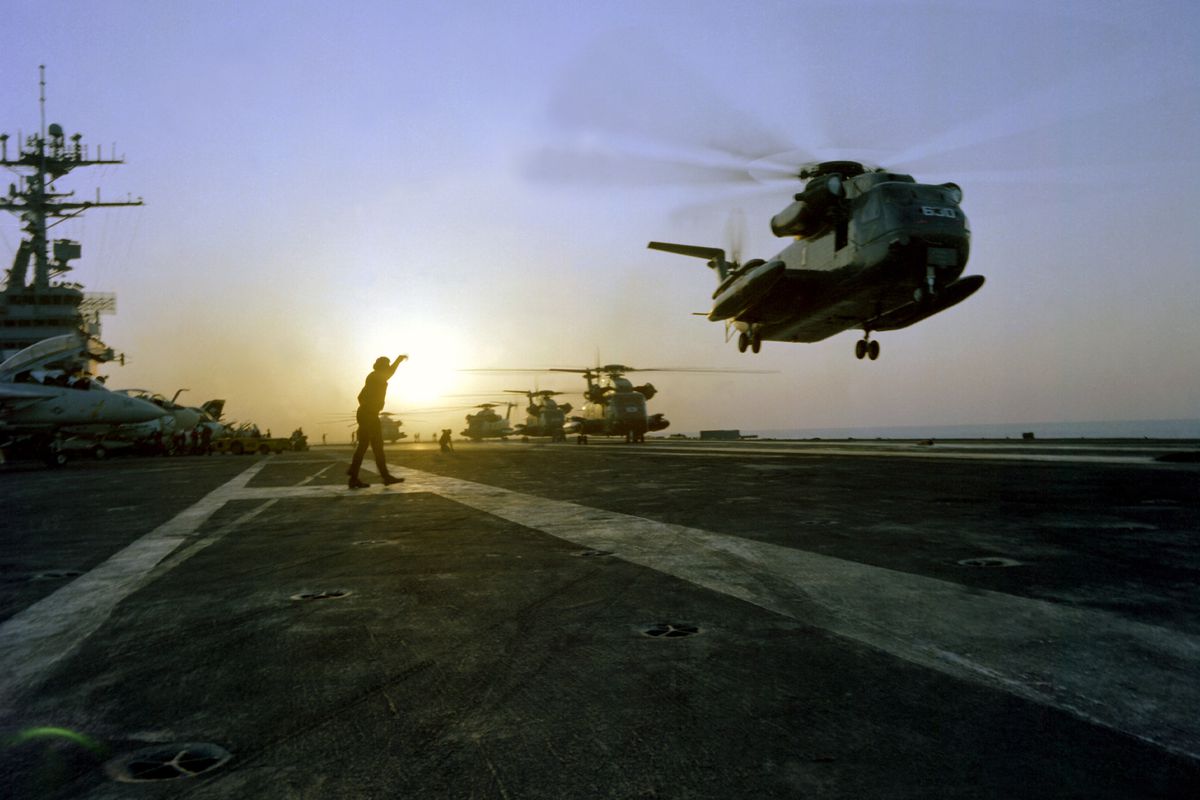 A helicopter lifts off the flight deck of the aircraft carrie﻿r U.S.S. Nimitz as the rescue mission to Iran gets under way. NARA

As former participants and principal architects of the raid share their memories and experiences, animation reminiscent of a graphic novel serves to re-create a tragic chain of events. Only five of the helicopters were still fully operational after landing. The supposedly remote location was adjacent to a roadway, and when a bus approached, the American forces had to hold the passengers as hostages lest their cover be blown. And then, as a dust storm swirled about, a helicopter crashed into a transport containing soldiers and jet fuel, causing a massive explosion that lit up the night sky and took the lives of eight American soldiers who were burned alive. In a grisly and nauseating act, Iranians dragged the charred corpses into public view and put them on display with cameras rolling.

Director Kopple has obtained never-before-heard audio of communications between Carter and the military command, and it’s absolutely chilling to hear the president’s reactions to receiving news that goes from hopeful to cautionary to terrible to devastating. The decision is made to abort the mission, and the hostages remained captive until Jan. 20, 1981 — literally minutes after President Ronald Reagan was sworn in after trouncing Carter in the 1980 election. Even if Operation Eagle Claw had been successful, it’s debatable if Carter would have won re-election, but after that globally humiliating and tragic failure, he had no chance. America was looking for a leader right out of a Hollywood movie.
at August 21, 2020