Giuliani is starting to act like an idiot, needs to take Lightfoot's advice.....don't smoke it everyday. 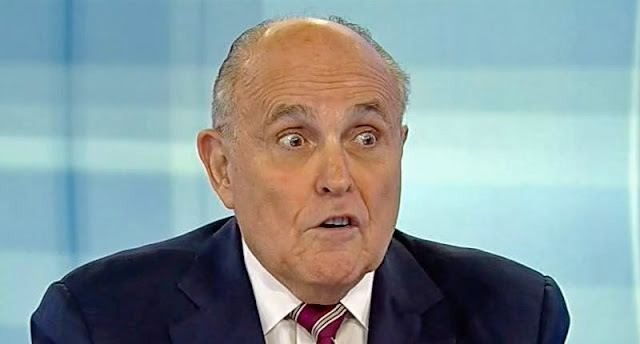 Subpoenas are issued for information on Giuliani’s associates, Lev Parnas and Igor Fruman


Subpoenas issued to people with ties to President Trump’s personal lawyer, Rudy Giuliani, and his associates indicate a broad federal investigation into possible money laundering, obstruction of justice and campaign-finance violations, and suggest that prosecutors are looking closely at the work of Mr. Giuliani himself, according to people familiar with the matter.

In recent weeks, prosecutors have sent subpoenas and other requests to potential witnesses seeking records and information related to Mr. Giuliani and two of his associates, according to the people. The investigation, led by the Manhattan U.S. attorney’s office and the Federal Bureau of Investigation, has already led to campaign-finance charges against the associates, Lev Parnas and Igor Fruman.

Mr. Giuliani said in an interview that he hadn’t been contacted by prosecutors and has denied wrongdoing.

Subpoenas described to The Wall Street Journal listed more than a half dozen potential charges under consideration: obstruction of justice, money laundering, conspiracy to defraud the United States, making false statements to the federal government, serving as an agent of a foreign government without registering with the Justice Department, donating funds from foreign nationals, making contributions in the name of another person or allowing someone else to use one’s name to make a contribution, along with mail fraud and wire fraud.

Private Photos of Indicted Donor Depict Ties to Trump, Giuliani
YOU MAY ALSO LIKE

Investigators have sought information from prospective witnesses about Messrs. Parnas’s and Fruman’s political and business activities, and how they intersected with the Trump administration and Mr. Giuliani’s work, according to the people familiar with the investigation.

Prosecutors alleged in the indictment last month that Messrs. Fruman and Parnas concealed the true source of a $325,000 donation to America First Action by listing it as a gift from an energy company they had recently founded. The super PAC said it has placed the contribution into a segregated bank account.

What do you think these subpoenas mean for Rudy Giuliani? Join the conversation below.

Mr. Giuliani in an interview with the Journal on Sunday said that when clients have asked him to do something related to the Trump administration, he has referred them to registered lobbyists. He also denied any business dealings in Ukraine since he began serving as Mr. Trump’s lawyer in April 2018.


“All they have to do is come and ask me,” he said of investigators. “There’s obviously a concerted effort to spread as many lies about me as possible, to destroy my reputation so that I’m not credible when I continue to reveal all of the massive evidence of criminality by the Bidens.”

Messrs. Giuliani and Trump have pressed Ukraine to investigate former Vice President Joe Biden, now a Democratic presidential candidate, and his son, Hunter Biden. They allege it was corrupt for the younger Biden to serve on the board of Burisma Group, a Ukrainian gas company, while his father as vice president was spearheading an anticorruption effort in the country. The Bidens have denied wrongdoing. The younger Mr. Biden has said he used “poor judgment” when he decided to join the board, but said he did nothing improper.

Messrs. Parnas and Fruman assisted Mr. Giuliani in his push for investigations in Ukraine, efforts that at times aligned with business opportunities sought by the two men, the Journal has previously reported, citing people familiar with the matter.

Those overlapping concerns could be of import to investigators, as they consider how Messrs. Fruman and Parnas gained access to Mr. Trump’s inner circles. At least two of the people who received subpoenas had been asked by Mr. Parnas to invest in Fraud Guarantee—a fraud-insurance company he helped set up in Florida—or to help fund a promised $500,000 payment to Mr. Giuliani, who said he provided business and legal advice to the company, people familiar with Mr. Parnas’s requests said.

A representative for one of those people, a businessman in Florida, said the man had declined to provide any money. The other person, also a Florida businessman, did invest in Fraud Guarantee after Mr. Parnas told him his plan was to secure a $20 million federal grant, according to one of the businessman’s associates. The Journal couldn’t determine what the grant would fund.

Mr. Giuliani said Sunday: “I had no knowledge of a grant, and it seemed to me they were at a premature position to be looking for a grant.”

Ukraine Energy Official Says Giuliani Associates Tried to Recruit Him
A Businessman’s Second Act Upends Giuliani’s Ukraine Work for Trump
Giuliani Associate Left Trail of Troubled Businesses Before Ukraine Probe Push
The payment to Mr. Giuliani was ultimately funded by Charles Gucciardo, a personal injury lawyer, who paid Mr. Giuliani $500,000 in two installments last fall, according to Mr. Giuliani. In exchange, Mr. Gucciardo received a stake in the company, his attorney said. His attorney said Mr. Gucciardo believed Fraud Guarantee had “tremendous potential” because Mr. Giuliani “was going to be behind, alongside, and the face of the company.”

Some of the subpoenas sought materials relating to Fraud Guarantee and David Correia, who co-founded Fraud Guarantee with Mr. Parnas. Mr. Correia was also charged in the October indictment with one count of participating in a conspiracy to conceal the origins of campaign contributions from overseas donors. A lawyer for Mr. Correia, who pleaded not guilty, didn’t immediately respond to a request for comment.


After starting the company in 2013, the men hired Jack Burkman, a Washington lobbyist, to help them obtain federal money, Mr. Burkman said. Messrs. Parnas and Correia sought to pitch the company as a tool for the Obama administration in its pushes for small-business investment and consumer protection, according to a person with whom Mr. Parnas discussed the grant. Fraud Guarantee billed itself as an insurer for investors against fraud, though it has never had any clients.

Mr. Burkman in an interview said he met Mr. Parnas in 2012 and assisted the company with an application for a federal grant based on “computer innovation in the role of finance.” Mr. Burkman said he filed the application in 2013 or 2014 but declined to discuss the matter in detail, citing attorney-client privilege. He denied lobbying for the company.

Mr. Parnas told one potential investor in 2014 that he was headed to Washington to meet with Michelle Obama, then the first lady. No meeting occurred, according to a former White House official. Fraud Guarantee never received a federal grant.

—Joe Palazzolo and Alex Leary contributed to this article.

Write to Rebecca Davis O’Brien at Rebecca.OBrien@wsj.com, Rebecca Ballhaus at Rebecca.Ballhaus@wsj.com and Shelby Holliday at shelby.holliday@dowjones.com
at November 25, 2019