Now Donald Trump taking over the Rose of Tralee? 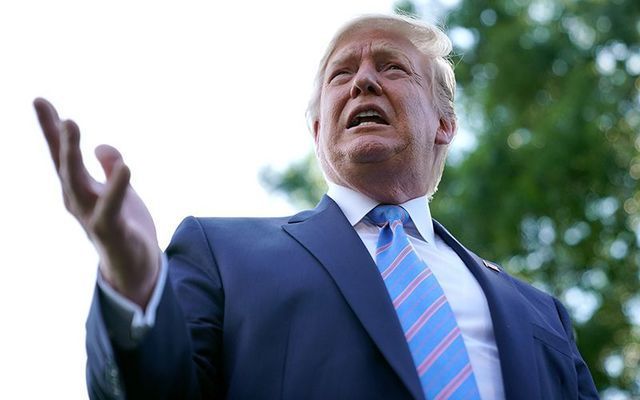 I’m beginning to think Trump is God as he seems to be everywhere.

Tired from reading about the latest feud with the Chinese, the fight over Greenland (I think he wanted to move ICE there... get it?).
Then there were the allegations against Jews who dare to vote Democratic, the schmozzle over the
Chairman of the Fed, the fight with the European Union and so on.

My head was spinning. I decided to get away from it all.

One of the most-watched TV programs all year in Ireland is the Rose of Tralee.
Talented and attractive young women from all over the world jet in seeking the title of Rose of Tralee. The town of Tralee in Kerry is jam-packed and a great time is had by all.
It’s pretty harmless stuff and entirely predictable, which is why millions tune in. It's a cultural phenomenon.
One of the fun things to do is read the bios of all the different girls. It would gladden your heart to see the pride in Irish ancestry.
So, I flipped on the old laptop and settled down for a nice read.
That’s when Trump ambushed me yet again.
Turns out the County Clare Rose works for Trump International out of his Irish property.
Turns out he wished her well during his recent visit to Ireland.
ADVERTISING
Turns out he may have yet another reason to brag next week if his employee wins.
She could. She’s very accomplished.
Trump, Trump, Trump
What next? Maybe Trump throwing in the ball in next week’s All Ireland football final or perhaps scoring the winning goal? Scoring the opening try in the Rugby World Cup in Japan? Riding the winner of the Breeder’s Cup Classic at Santa Anita? Joining Liverpool for a record transfer fee in the Premiership? All sports and events I like to watch.
Aargh! Maybe he is the Messiah

Victoria O'Connell, Clare Rose 2019. Credit: Facebook/Victoria O'Connell
Anyway, here is the Clare Rose profile.
Clare Rose
Name: Victoria O'Connell
Age: 28
From: Galway
Occupation: Membership and Real Estate Executive at Trump International Doonbeg
Galway-native Victoria is the second eldest of five children.
Her father is from Dublin and her mother is from Glasgow in Scotland.
She says her parents decided to make their home in Kilrush in the Banner County shortly after she was born.
Victoria adds that her mother considers herself completely Irish - until Scotland play Ireland in rugby.
Read More: Irish Waterford Rose Kirsten Mate Maher wins the 2018 Rose of Tralee
The hopeful attended Wilson's Hospital Boarding School and is a "strong believer in positive thinking.”
She enjoys yoga, mindfulness, reading and walking in her spare time.
Victoria first studied Business with Event Management at Limerick IT and moved on to a masters in Marketing, Consumption, and Society at the University of Limerick, receiving first-class honors in both degrees.
She now works at Donald Trump's hotel in Doonbeg and says she's "honored" to represent her country at the festival.
at August 26, 2019