It's old, don't you know

Bill to demolish part of McCormick Place along lakefront gets labor support
Legislation in Springfield would add a ride-sharing tax and allow for construction of a new building over King Drive. 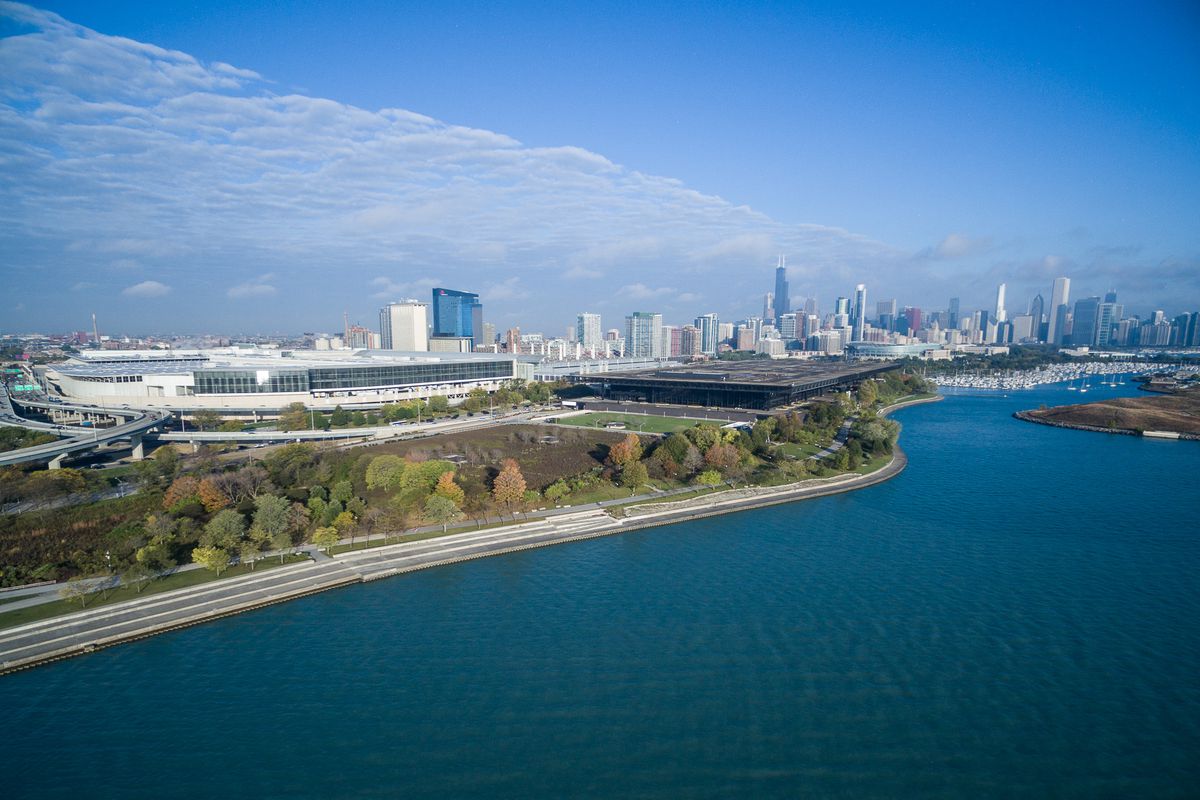 The Chicago Federation of Labor wants to demolish the oldest McCormick Place building and replace the lost convention space with a new building over Martin Luther King Drive. Facebook

With just over a week to go in the spring legislative session, Chicago Federation of Labor President Bob Reiter is beating the drum for a plan to demolish the above-ground portion of Lakeside Center, the oldest McCormick Place building, and replace the lost convention space with a new building over Martin Luther King Drive.

Insiders said the partial teardown of Lakeside Center could result in additional parkland along the lakefront and that below-ground portions of the building, such as the Arie Crown Theater, could still be preserved.

It was a last-stab at salvaging for Chicago a project that ultimately went to Los Angeles when Lucas got fed up with the court battle that blocked Emanuel’s plan to build the Lucas Museum on a parking lot near Soldier Field.

Now, State Rep. Kam Buckner, D-Chicago, is trying to move a bill through the Illinois General Assembly that would accomplish virtually the same thing without the Lucas Museum. It includes a $1-per-trip tax on ride-share services, although the amount is up for negotiation.

“It would take down the Lakeside Center above ground. It would replace that space by building a bridge building over Martin Luther King Drive. It would also make all of the space more together, instead of spread out as it is,” Reiter said Wednesday.

“When President Obama came in, you park in the west building, walk to the north building, go through security, then walk all the way to the lake to go into the event at the Lakeside Center. You would bring all of that into a tighter area and it would also make it more marketable for bigger shows that would rather have their space fit into a tighter footprint.”

The bill calls for raising the bond limit of the Metropolitan Pier and Exposition Authority, commonly called McPier, by roughly $600 million, to $3.45 billion. The authority runs McCormick Place.

The expansion would be paid for, in part, by imposing a fee on ride-hailing trips. The precise amount is still being negotiated, but the text of the measure, HB2693, sets it at $1 per ride covering trips in the McCormick Place area and the city’s airports.

Buckner said the bill is on hold pending negotiations with Gov. J. B. Pritzker and House and Senate leaders. A spokeswoman for the governor did not reply to a message seeking comment.

”The goal is to be able to renovate that piece to be able to connect it in a better way to the new McCormick Place West building,” Buckner said. “ ... Some of it would be renovated and some of it, there’s going to be a knock down to rebuild some of it as a rooftop kind of connection.”

The last movement on the bill was in April. It must be read for a third time by Friday for any action on the bill to happen this session, which ends May 31.

Reiter is all for the idea because it would help level the tilted playing field between ride-hailing and a dying taxicab industry.

“Look at all the costs that taxis have to pay for buying their medallions. The fees they have to pay. Ride-share has historically gotten the better deal out of all that. It’s the quote-unquote ‘gig economy,’” Reiter said.

The labor federation is pushing the latest in a seemingly endless parade of McCormick Place expansion bills because of the temporary construction jobs and the permanent convention jobs it would create. The CFL is a part owner of the Chicago Sun-Times.

“McCormick Place has created a lot of jobs for people in the service industry. There’s a ton of jobs down there for Unite Here, for SEIU, for Teamsters. Those are people who live in the real neighborhoods of Chicago,” Reiter said.

“The building helps drive a lot of economic activity — not just in that area, but all across downtown. When big enough shows come in, hotels end up getting booked out in the suburbs because everything fills up down here. That’s real revenue for not only for taxing bodies and for the city and the businesses, but that ends up in the pockets of room attendants and security guards and people who work in restaurants.”

The bill would change McPier’s name to the Metropolitan Public Exposition Authority to downplay any connection to Navy Pier. The agency still owns Navy Pier but leases it to a nonprofit agency to run.
at May 23, 2019

Email ThisBlogThis!Share to TwitterShare to FacebookShare to Pinterest
Labels: Business