RHOADS: GOP LEADERS HAVE ONLY THEMSELVES TO BLAME FOR THE RISE OF TRUMP 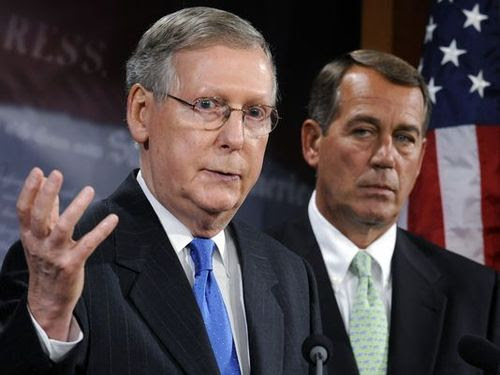 By Mark Rhoads -
On Election Night in 2014, many conservative Republicans were very happy that the GOP won the majority in both houses of Congress because they hoped the victory meant that GOP leaders would stand firm against liberal policies of President Obama.
Maybe those expectations were unrealistic.

But in any case, those high hopes of 2014 soon faced the
reality that long-time incumbent GOP members who make a career of holding on to their offices failed to deliver on their campaign promises. Instead they started to make deals with Obama on trade policies, the budget, the Export-Import Bank, immigration, homeland security and a variety of other issues where they thought it was easier not to use their majority to block the president.

As a result of their lame excuses for not asserting themselves, they made thousands of previously loyal conservatives very angry at their failure to lead and fight for conservative principles.
The failures of former Speaker John Boehner and Senate Majority Leader Mitch McConnell to use their Republican majority to block Obama and advance freedom was directly responsible for providing a fertile field of angry conservatives who felt they had been betrayed. Recent liberal Democrat Donald Trump appealed to that base on the basis of blind rage.
Even though many conservatives fully understand that Trump is not anything like a  conservative himself, they still vote for him as a way to vent their anger at the GOP leaders who follow the lead of amoral big business leaders and not the principles of the grass roots-conservatives.
Trump would be easy for Democrats to defeat in the fall, but the protest voters do not care anymore because they think the betrayal of the GOP establishment was so massive. So former Speaker Boehner, current Speaker Paul Ryan, and Sen. McConnell have only themselves to blame if Trump kidnaps the GOP nomination and takes their caucus members down to defeat in November.
at February 22, 2016