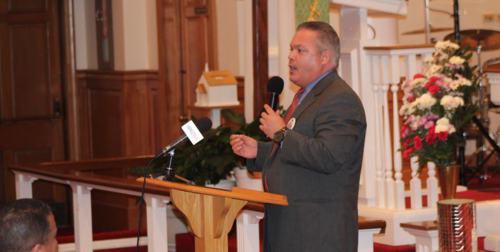 By Joe Kaiser -
The Cook County Board is settling a federal lawsuit brought forth by 21 deputies alleging county Sheriff Tom Dart retaliated against them for political purposes. The deputies, who claim the retaliation is the result of backing Dart’s 2006 Democratic primary opponent Richard Remus, will split $2.4 million in the settlement.
But even with the case being settled, one of Dart’s current primary opponents knows this isn’t the first time the sheriff has been sued, and he thinks it’s costing the county too much.
Bill Evans, a lieutenant in the Cook County Sheriff’s Police Department, is challenging Dart in the Democratic primary, and contends the multiple lawsuits brought against Dart’s administration are hampering the force. Most of the lawsuits, Evans said, name Dart specifically and are “completely avoidable.”
“Lawsuits are going to be part of law enforcements,” Evans said, “but if (the plaintiffs) are winning large in plus half a million lawsuits, that’s very damaging. This issue has been out in the forefront for a number of years.”
The $2.4 million case alone was years in the making. Originally filed in 2008, the 21 deputies were part of the Special Operations Response Team at the Cook County Jail, which was disbanded shortly after Dart won the general election in November 2006. In that race, Dart had the backing of his predecessor, former Sheriff Michael Sheahan.

In 2012, a jury awarded the deputies nearly $1.6 million, but a judge later reduced it to less than $1.4 million before the case headed to arbitration for the proposed settlement. Dart’s office will not admit any wrongdoing as part of the settlement.
And, as Evans pointed out, this case isn’t an outlier. Just days after it was reported the lawsuit with the deputies was being settled, Sheriff Deputy Patrick Sheahan, Michael’s nephew, sued the sheriff’s department, alleging he was punished for complaining about work conditions and requesting lighter duty following a back injury.
Dart’s office did not return comment to Illinois Review for any of these instances.
Another lawsuit occurred in the spring of 2012, when the Illinois Department of Labor sued Cook County, claiming it owed its canine police officers a total of about $530,000 in back pay for the time the officers spent caring for their assigned dogs when not on the job between January 2007-July 2011. Not paying the officers for that time was a breach of a union contract, and an arbitrator settled in favor of the union officers for $543,000. Dart then disbanded the K-9 unit and reduced the number of working dogs on force.
One of Evans’ goals if elected is to reinstate the K9 unit, in addition to improving relationships with unions. The Chicago Federation of Labor and the Teamsters 700 both announced recently that neither would be endorsing Dart.
In an endorsement session last week with the Daily Herald, Evans and fellow primary challengers Sylvester Baker and Tadeus Palka also slammed Dart over the possibility of removing electronic monitoring for people awaiting trial or nonviolent offenders serving short sentences.
Evans told Illinois Review last week that the electronic monitoring system was just mismanaged by Dart, and does not need to be removed. He also added that, in addition to the numerous lawsuits against the Sheriff’s office, the differences in backgrounds between him and Dart should be a factor in the election.
“Here we are in Cook County in the state of Illinois,” Evans said. “We have budget deficits that are almost catastrophic in state and county, but you have a person like myself with no political connections but understands the job. But you have this guy (Dart) who is a career politician, who has his name recognized because he repeatedly puts himself on TV. People are constantly complaining about government, about the deficit, but what do they do? They turn around and vote for the same guys. And I think if it were put the way I just put it they might think ‘hey this guy has a good point. Let’s get some of the old guard out.’”
“At times it’s almost mind numbing when I talk to people on the street,” he continued. “They can’t think of a reason they should vote for Tom Dart, but they still think they should.”
Dart has never faced much of a challenge in his sheriff races. He won both the 2006 and 2010 Democratic primaries in landslides, and followed up with the same results in the general elections. He trounced Republican Peter Garza with nearly 65 percent of the vote in 2006, and beat up on Frederick Collins with nearly 70 percent of the vote in 2010. There are no Republican candidates for sheriff in 2014.
Evans, a 23-year police veteran, acknowledged Dart’s powerful base and incumbent advantage, but he believes the election boils down to basic philosophies for the job in which Dart falls short.
“I think (Cook County) law enforcement officers need to be guided, supported, led and trained,” Evans said. “If that isn’t going to happen, we aren’t going to get a quality product out on the street. Somewhere along the way, we lost this philosophy.”