MR. BIG BROTHER TO YOU 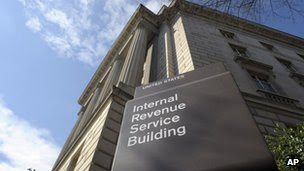 US President Barack Obama has said the federal tax agency's targeting of conservative groups for extra scrutiny was "intolerable and inexcusable".
He said those who carried out the Internal Revenue Service's (IRS) actions would be held responsible.
Mr Obama spoke after a treasury department report placed the blame on "ineffective management" at the agency.
The US attorney general earlier ordered an FBI inquiry into the IRS conduct before the 2012 presidential election.
Eric Holder told a news conference that agents would determine if any laws had been broken.
The actions of tax officers, if not criminal, were "certainly outrageous and unacceptable", Mr Holder added.
'Inappropriate criteria'
The IRS had used key words such as "Tea Party" and "Patriot" to subject applications by groups seeking tax-exempt status for extra scrutiny.
Continue reading the main story

AnalysisMark MardellNorth America editor
From what we know so far this appears to be an A-grade scandal - a shocking abuse of power with apparently political motives. President Obama says he's outraged - and has moved quickly to make it clear he knew nothing about it.
It is true that plenty of groups claim to be non-political when most sensible people would say that politics is their main purpose. But on the evidence so far, it seems only right-wing groups were targeted - and more bizarrely still only small local ones, not the huge lobby groups.
This affair, along with the justice department's raid on the Associated Press, is likely to have a political impact. Conservative groups have long claimed an overbearing administration is targeting their freedoms and that abuses of power are ignored by a complacent media. The events of this week will strengthen their belief that someone is out to get them.
On Tuesday evening, Mr Obama said in a statement on the treasury department's investigation: "The report's findings are intolerable and inexcusable.
"The IRS must apply the law in a fair and impartial way, and its employees must act with utmost integrity. This report shows that some of its employees failed that test."
He spoke as a Treasury Inspector General for Tax Administration (TIGTA) report found that senior IRS officials had told inspectors the decision to focus on Tea Party and other groups based upon their names or policy positions was not influenced by any individual or organisation outside the agency.
But it found managers had allowed "inappropriate criteria" to be developed and stay in place for more than 18 months, resulting in "substantial delays" in processing applications for tax-exempt status, and requests for "unnecessary information", such as lists of past and future donors.
Of the 296 total applications reviewed by TIGTA, 108 were approved, 28 were withdrawn by the applicants, and 160 were still open, the report said.
In response, the acting IRS Commissioner of the Tax Exempt and Government Entities, Joseph Grant, said: "We believe the front line career employees that made the decisions acted out of a desire for efficiency and not out of any political or partisan view point."
'Targeting political enemies'
Mr Obama's press secretary, Jay Carney, said earlier that no-one at the White House had known about the matter until lawyers were told several weeks ago TIGTA would publish a report.
Continue reading the main story

This is big brother come to life”

Governors Bobby Jindal of Louisiana and Scott Walker of Wisconsin
At least three Congressional committees are planning hearings into the matter.
The House Ways and Means committee will hold a hearing on Friday. The Senate finance and investigations committees have also said they will hold hearings.
"This was a targeting of the president's political enemies, effectively, and lies about it during the election year so that it wasn't discovered until afterwards," senior Republican Congressman Darrell Issa told CBS on Tuesday.
Two high-profile Republican governors called on President Obama to appoint a special prosecutor to investigate whether any laws were broken.
"This is big brother come to life and a witch hunt to prevent Americans from exercising their first amendment [free speech] rights," Governors Bobby Jindal of Louisiana and Scott Walker of Wisconsin wrote.
Ahead of the 2012 presidential election, conservative groups complained to the IRS and to members of Congress that their applications for tax-exempt status were being held up.
Some groups have said they were asked to provide lists of donors and volunteers, statements of their activities, and lists of legislators they had contacted.
at May 15, 2013