Blago is getting out! 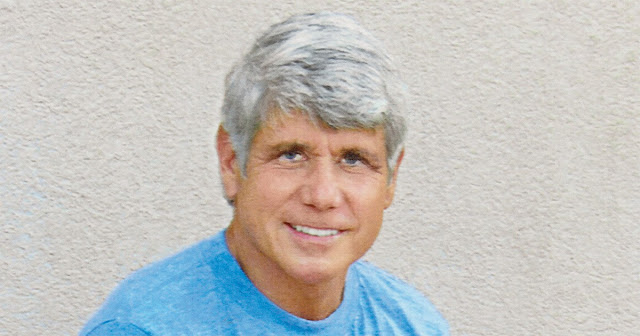 Soon, we will he seeing his smiling face on TV every night. Then there will be the book and then the movie, starring himself. I hope he learned to avoid the media. First stop tomorrow is Disney World.
President Donald Trump on Tuesday commuted the 14-year prison sentence of disgraced former Illinois Gov. Rod Blagojevich, setting in motion a process that could free him shortly from a Colorado prison after serving more than seven
years behind bars.

In explaining his move, Trump called Blagojevich’s sentence “ridiculous.”
“Yes, we commuted the sentence of Rod Blagojevich,” Trump told reporters Tuesday before he departed on Air Force One. “He served eight years in jail, a long time. He seems like a very nice person, don’t know him.”
Trump’s move brings to a stunning conclusion one of the most bizarre legal dramas in Illinois history. It’s a tale reaching back more than a decade, to the December 2008 early morning arrest of Blagojevich by the FBI at his Ravenswood Manor home.
Trump’s decision brought praise from Blagojevich’s family and supporters Tuesday.
“I am forever grateful to President Trump, who is the nation’s ultimate disrupter, for commuting my brother’s sentence. President Trump is just what the nation needs,” Rod Blagojevich’s brother, Rob, said Tuesday.
Trump personally called Patti Blagojevich about 10:30 a.m. to let her know about his decision, a White House source said. Patti Blagojevich could not be immediately reached for comment Tuesday.
The ex-governor could be released as early as Tuesday or Wednesday, depending on how fast the federal Bureau of Prison can act.
By 12:30 p.m., in anticipation of the announcement, a half-dozen TV crews were camped outside that home.
The former federal prosecutors who brought the case against Blagojevich issued a joint statement noting that the ex-governor remains a convicted felon.
“While the president has the power to reduce Mr. Blagojevich’s sentence, the fact remains that the former governor was convicted of very serious crimes. His prosecution serves as proof that elected officials who betray those they are elected to serve will be held to account,” according to the statement from Reid J. Schar, Chris Niewoehner, Carrie E. Hamilton and former U.S. Attorney Patrick J. Fitzgerald.
Chicago Mayor Lori Lightfoot, in Springfield on Tuesday, said “there’s a lot of people who oppose this action, given what Blagojevich did during his time in office.”
House Republican Leader Jim Durkin, ranking GOP member of the Illinois House impeachment committee during Blagojevich’s removal from office, said he believes Trump is commuting the former governor’s sentence “just because of the celebrity of Rod Blagojevich.”
“I was involved first-hand with the impeachment efforts and I saw a governor who was rogue on steroids,” Durkin said. “He was a person that didn’t care about the state of Illinois. He cared about his own ambition and he abused the office.”
The ex-governor’s father-in-law, former Chicago alderman Richard Mell, did not immediately return a message seeking comment Tuesday on the potential development. Neither did his daughter, former alderman Deb Mell.
Following Blagojevich’s arrest in 2008, the state watched as its governor was impeached and convicted in two high-profile trials. But that’s not all. His wife ate a tarantula on national television. And the former governor took his turn on a TV game show that put his incompetence with computers on display for the world to see. He could barely turn one on.
The ridicule might have been worth it, though. Few people expected the host of that game show, Donald Trump, would ascend to the White House and be in a position to one day save Blagojevich.

Timeline: Rod Blagojevich’s strange odyssey from the Illinois House to the Big House

Now Trump has done so in the midst of the largest public corruption investigation to hit Chicago since the days of the former governor’s own scandal. Several city and state politicians now either face charges or are under investigation themselves.
Blagojevich was not the only high-profile person to see their prison sentences commuted or receive a pardon. Among the 11 people receiving executive grants of clemency Tuesday were Edward DeBartolo Jr., the former owner of the San Francisco 49ers, Michael Milken, once the poster boy for Wall Street greed, and the former head of the New York City Police Department, Bernard Kerik, who was convicted of tax fraud and making false statements.
Blagojevich, 63, is one of a handful of high-profile individuals from Illinois who have sought clemency from the Trump administration, a list that also includes former U.S. Rep. Jesse Jackson Jr. and George Papadopoulos, a former Trump campaign adviser.
U.S. District Judge James Zagel handed Blagojevich a stunning 14-year prison sentence in 2011. Blagojevich appealed. It took years, but a three-judge panel finally tossed five of his 18 convictions in 2015 and ordered a new sentencing hearing. Zagel then left Blagojevich’s daughters in tears when he handed the former governor the same 14-year sentence all over again in 2016.
In 2011, Zagel told Blagojevich, “the fabric of Illinois is torn and disfigured and not easily or quickly repaired.” He echoed those remarks in 2016.
Blagojevich pressed on. The U.S. Supreme Court shot him down for the last time in April 2018, leaving presidential clemency as Blagojevich’s only hope. That’s when Patti Blagojevich began an obvious campaign to court the attention — and mercy — of Trump.
By then, the president was well into his own battle with then-Special Counsel Robert Mueller and former FBI Director James Comey.
“This same cast of characters that did this to my family are out there trying to do it to the president,” Patti Blagojevich told the Chicago Sun-Times in a phone interview in April 2018. She linked Mueller and Comey to her husband through former U.S. Attorney Patrick Fitzgerald, who prosecuted Blagojevich and went on to serve as Comey’s lawyer in private practice.
Blagojevich’s fortunes turned much brighter in May 2018 when, on Air Force One, Trump told reporters he might spring Blagojevich, who he said went to jail “for being stupid.”
Blagojevich’s legal team then filed a new, formal, request for a commutation — a move that would not absolve the former politician but would reduce his time in prison.

Trump has repeatedly erred when he said Blagojevich was sentenced to 18 years or so. Zagel gave Blagojevich 14 years, putting him on track for release in March 2024. Additionally, despite the appellate court’s decision to toss five of his convictions, prosecutors said in 2016 that Blagojevich “remains convicted of the same three charged shakedowns” for which he originally went to prison.
Those include his attempt to sell then-President-elect Barack Obama’s U.S. Senate seat, to extort the CEO of Children’s Memorial Hospital for $25,000 in campaign contributions and to hold up a bill to benefit the racetrack industry for $100,000 in campaign contributions.
Blagojevich was also caught on tape making the notorious comment, referring to the Senate seat, “I’ve got this thing and it’s f---ing golden.”
Trump has earlier said that Blagojevich has “been in jail for seven years over a phone call where nothing happens — over a phone call which he shouldn’t have said what he said, but it was braggadocio you would say. I would think that there have been many politicians — I’m not one of them, by the way — that have said a lot worse over the telephone.”
Once Trump started to consider doing something for Blagojevich, he asked son-in-law and senior adviser Jared Kushner to work on a commutation with the White House Counsel’s office, a senior administration official has told the Sun-Times.
Seven Republican House members from Illinois in 2018 urged the president not to commute Blagojevich’s sentence. Rep. Darin LaHood, who organized the letter, asked Trump to “give thoughtful attention to our fear that granting clemency for the former governor would set a detrimental precedent and send a damaging message on your efforts to root out public corruption in our government.”
Blagojevich’s appeal and campaign for clemency revealed some details about the seven years he’s spent behind bars. It turned out he helped form a prison band known as The Jailhouse Rockers. They had a 21-song playlist that included “Bad Moon Rising.”
His appearance by video at his re-sentencing also confirmed, once and for all, that his black hair had gone snow white in prison.
Blagojevich spoke then about reconciliation, telling the judge that “holding onto the anger was no good.” He talked remorsefully about his legacy, saying he winces every time he hears his name alongside the word “corruption” because of the damage the tag has brought to his family.
And, he said, “I made mistakes.”
“I regret those mistakes and those judgments,” Blagojevich said at the time. “And I’m sorry, your honor. I wish I could find a way to turn the clock back and make different choices. But that is not possible.”
at February 18, 2020