Email ThisBlogThis!Share to TwitterShare to FacebookShare to Pinterest
Labels: G-8

NATO is good for Chicago?

I am just wondering about what type of benefit will be derived from all the road closures and disruptions. What about the cost of all this? It seems to me that if security is really the #1 concern, it  should have been held in a different locale. Camp David, DC, etc.
Chicago residents, employees and businesses will be forced to endure road closures, parking restrictions and changes to city services and public transportation routes — and three Chicago museums will be forced to close for a day — to protect world leaders attending the NATO summit, the U.S. Secret Service announced Friday.
The inconveniences that Chicagoans have long anticipated will begin with parking restrictions at 6 a.m. Sunday May 13, one week before President Barack Obama and more than 50 world leaders are expected to gather at McCormick Place.
Another round of parking restrictions will kick in on Tuesday May 15 in “limited areas” near the convention center.
Road closures and pedestrian restrictions will take effect at midnight Friday May 18. Roads will re-open in time for the Monday evening rush hour.
In addition to the road closures and parking restrictions, there will be “intermittent traffic delays and temporary closures on interstate roads” as motorcades carrying world leaders make their way to and from McCormick Place and other events sites.
Hours before the Secret Service lowered the boom, Mayor Rahm Emanuel tried once again to convince city residents, employees and businesses it will be worth the headache to showcase Chicago on the world stage.
“I don’t minimize it. There will be inconvenience. There will be change for those three days. They’re making those plans to accommodate people in close proximity — the residents — and I don’t minimize there will be an inconvenience. But, we are not the only city to have had [world] forums,” the mayor said.
“I think we’re lucky to have this. It’s fortunate, given the economic opportunity here for this city. That said, they will lay it out. People will then be able to make adjustments for that Saturday, Sunday and part of Monday morning.”
Later Friday, officials told reporters at the city’s Office of Emergency Management that an actual fence around McCormick Place remains “under evaluation” and hasn’t been finalized.
“At this point, any businesses or any residents that would have been impacted by a hard perimeter have already been contacted by the United States Secret Service,” said Deb Kirby, chief of the Chicago Police Department’s Office of International Relations.
Frank Benedetto, special agent in charge of the Secret Service’s Chicago field office, said no residences are expected to be inside the proposed fence.
“All residents will be able to access their homes by vehicles,” Benedetto said. “All businesses will be open.”
Roadways that will see intermittent closures include the Kennedy Expy. between O’Hare Airport and downtown; Ohio from the Kennedy to Columbus Drive; Ontario from Fairbanks/Columbus to the Kennedy; the Ryan between the circle and I-55 and Roosevelt Rd., 18th Street and Canalport Ave. access from the outbound Dan Ryan Expy.
Another round of road closures and pedestrian restrictions kick in at 12:01 a.m., Saturday May 19 and will re-open in time for the Monday evening rush hour.
Those closures include: Lake Shore Drive between Balbo and 39th; I-55 between the Ryan and Lake Shore Drive; Columbus Drive at Balbo; Roosevelt Road between Michigan Avenue and Lake Shore Drive; Indiana between 21st and 25th; Calumet from Cullerton to Cermak; Prairie between 21st and 25th; 21st between Indiana and Calumet; Cermak from Michigan Avenue to King Drive; 24th Place and 25th Street between King Drive and State; Wabash from 24th Place to 25th Street; King Drive from 26th Street to Cermak; Moe Drive from 31st to Mines; 31st from Cottage Grove to Fort Dearborn Drive and Fort Dearborn Drive from 31st Street to Lakeside Center.
An entire week of parking restrictions will take effect, beginning at 6 a.m. Tuesday May 15, on the streets surrounding McCormick Place. Impacted streets include South Calumet Avenue between Cullerton and Cermak; South Prairie Avenue and Indiana Avenue between 21st and 25th; 21st Street between Calumet and Indiana; Cermak between Indiana and King Drive; 24th Place between Indiana and State; 25th Street between State and King Drive; and King Drive between Cermak and 26th.
At the museum campus, the Adler Planetarium, Field Museum and Shedd Aquarium will be open on Saturday May 19. But, parking will be limited to the top three floors of the Soldier field North Lot and the Adler lot. All of those lots will close with the museums at 5:30 p.m. Saturday. Vehicles that remain will be towed to an off-site lot.
At 6 p.m. Saturday, Northerly Island, formerly known as Meigs Field, will closed to vehicles and pedestrians, along with the “northern museum campus.”
The Planetarium, Field Museum and Shedd Aquarium will be closed on Sunday, May 20, opening day of the summit.
Streets around the museum campus, Willis Tower and the Cultural Center will also be closed during summit weekend, apparently for special events involving the world dignitaries.
Boat traffic will also be restricted during the summit on the Chicago River and on Lake Michigan in and around Burnham Harbor.
Although commuter rail lines that operate beneath McCormick Place will remain open during the summit, the McCormick Place stop will be closed on Sunday May 20 and Monday May 21.
“Other stations may be closed as needed,” the Secret Service said.
“Passengers should plan for delays as trains approach and pass through the McCormick Place stop due to necessary security measures.”
Changes to bus routes operating within the crazy quilt of areas restricted to vehicles and pedestrians “will be necessary,” the Secret Service said. Commuters were advised to check the CTA website for specific route changes.
The city will send text messages or voice mail alerts “related to extreme weather alerts, traffic disruptions, health alerts and major incidents.” To sign up, go to http://www.notifychicago.org.
at May 05, 2012 10 comments: 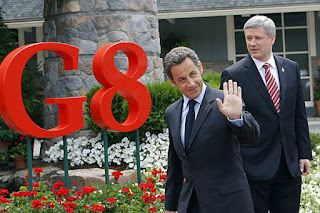 And we are bringing G-8 to Chicago why?Chicago is looking to purchase “blast resistant” trash containers to “eliminate or significantly reduce fatalities, injuries and structural failures” in the event of “terrorist bombs.”

New York City routinely removes its downtown garbage cans during the New Year’s Eve celebration in Times Square and other major events that have the potential to become terrorist targets.
But, it looks like Chicago has other plans as it prepares to play host to President Barack Obama and other world leaders during the NATO and G-8 Summits May 19 to 21 at McCormick Place.
Mayor Rahm Emanuel’s administration has issued a so-called “request for quotations” from companies interested in providing roughly 56 “blast resistant trash receptacles that would protect people, facilities and assets from various explosion effects.”
At the request of the city’s Office of Emergency Management and Communications, the document specifically states, “Bomb mitigation requirements are increasing to protect people, facilities and assets from various explosion aftermath, including fireballs, energy overpressure and fragmentation all of which will likely result from terrorist bombs.”
The office’s executive director, Gary Schenkel, could not be reached for comment.
The solicitation states that the office requires the new trash receptacles to mitigate the threat of: “primary fragmentation from materials in contact with the charge; secondary fragments from near the charge and pieces of trash receptacles should it fail and blast overpressure” and fireballs.
Interested contractors were advised that “explosive tests shall be conducted” and that “pre- and post-detonation photos along with video footage” must be submitted to the city along with their bids.
“Receptacles must have the capacity to contain and mitigate six pounds of pure TNT placed inside the receptacle,” the document states.
Deputy mayoral press secretary Jennifer Hoyle said the new trash containers would be located in “high-risk areas.” But, she played down the purchase by saying, “This is a replacement contract. We already have these.”
In March, 2011, then-Mayor Richard M. Daley’s administration awarded a $2.5 million contract to Massachusetts-based Big Belly Solar to provide at least 400 solar powered trash compactors in the central business district where pedestrian traffic is heaviest and trash bins need frequent pickups.
More recently, the Emanuel administration has talked about selling the rights to advertise on those downtown trash compactors to generate the $25 million in revenues from “municipal marketing” and sponsorship deals built into the mayor’s 2012 budget.
Much of the anxiety associated with hosting the back-to-back summits has centered around the international onslaught of protesters, the cost of containing them and the damage that may be caused by those demonstrations.
But, the impending purchase of blast resistant trash containers underscores the fact that an act of terrorism during the summits is a far greater threat.
The Chicago Sun-Times reported last month that Chicago Police officers facing off against protesters during the summits would be equipped with new face shields that fit comfortably over gas masks and include an air-tight seal to prevent officers from being blinded by liquids thrown at them.
The $193,461 emergency contract with Colorado-based Super Seer Corp. for the purchase of 3,057 shields marked the first use of the power granted to Emanuel to purchase goods and services for the summits — without City Council approval or competitive bidding — provided those items cannot be purchased under existing contracts.
The newspaper also reported that the city was soliciting bids for “riot gear and training aids” for the 30 horses in the Police Department’s Mounted Unit expected to play a key role in controlling crowds during the summits.
at March 02, 2012 No comments: