Tucker: What happens to New York City matters to the rest of us

U.S. Gets a Debt Warning From Fitch as Stimulus Battle Rages
Benjamin Purvis 2 days ago


(Bloomberg) -- One of the world’s major credit-rating companies fired a warning shot regarding the U.S.’s worsening public finances on Friday, just as lawmakers in Washington contemplate spending more to combat the economic fallout from the coronavirus pandemic.


Fitch Ratings revised its outlook on the country’s credit score to negative from stable, citing a “deterioration in the U.S. public finances and the absence of a credible fiscal consolidation plan.” The country’s ranking remains AAA.

“High fiscal deficits and debt were already on a rising medium-term path even before the onset of the
Read more »
at August 03, 2020 2 comments:

THE COIN SHORTAGE: A BIG DEAL ABOUT SMALL CHANGE

By Clifford Thies
Retailers are asking customers to use credit or debit cards, and some are refusing to make change in coins. They say it’s because of the novel coronavirus. The virus may be playing a part; but, there’s more to the coin shortage.

Retailers are asking customers to use credit or debit cards, and some are
Read more »
at July 29, 2020 2 comments:

Spot Gold is surging in Asian trading as the dollar is dumped. 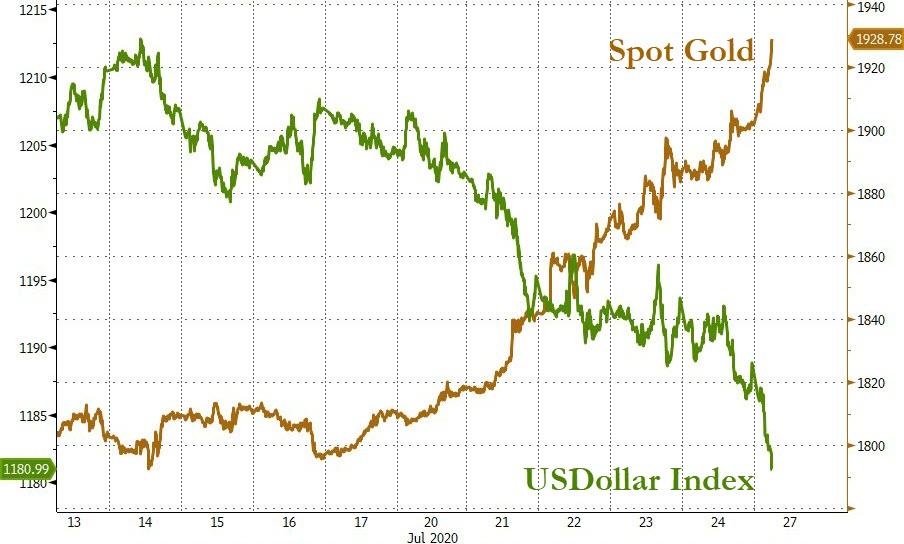 As debt climbs to record $27 trillion, Congress says it's not time to turn off stimulus spending

Dems just want to spend it all'Now's not the time to turn off the faucet when, you know, we should be using our strong balance sheet to borrow to stimulate the economy' - California Democratic Rep. Scott Peters

As the national debt approaches $27 trillion, Congress says federal stimulus spending must continue due to the pandemic.

The government spent $864 billion more than it took in during June, bringing the deficit to a record
Read more »
at July 22, 2020 1 comment:


Remember all those “green shoots?”

That was the ubiquitous phrase used by White House officials and TV talking heads in 2009 to describe how the U.S. economy was coming back to life after the 2008 global financial crisis.

The problem was we did not get green shoots, we got more like brown weeds.

The economy did recover, yes, but it was the slowest recovery in U.S. history.

After the green shoots theory had been discredited, Treasury Secretary Tim Geithner promised a “recovery summer” in 2010.

That didn’t happen either.

The recovery did continue, but it took years for the stock market to return to its previous highs and even

Read this but remember, it's only a theory

The greater fools still partying in the first-class lounge are in denial that even the greatest, most technologically advanced ship can sink.
On April 14, 1912, the liner Titanic, considered unsinkable due to its watertight compartments and other features, struck a glancing blow against a massive iceberg on that moonless, weirdly calm night. In the early hours of April 15, the great ship broke in half and sank, ending the lives of the majority of its passengers and crew.
The usual analogy drawn between the Titanic and our financial meltdown stems from the initial complacency of the passengers after the collision. Some passengers went on deck to play with the ice scraped off the berg, while most returned to the festivities still working

If enacted, it will be the final nail in the coffin of the Illinois economy

Taxing messages: Opposing sides in graduated income tax battle move to captivate captive audience
With the COVID-19 pandemic grinding much of everyday life to a halt, the groups have the benefit of reaching out to taxpayers in an unprecedented setting that has millions of people working from home and glued to their screens. 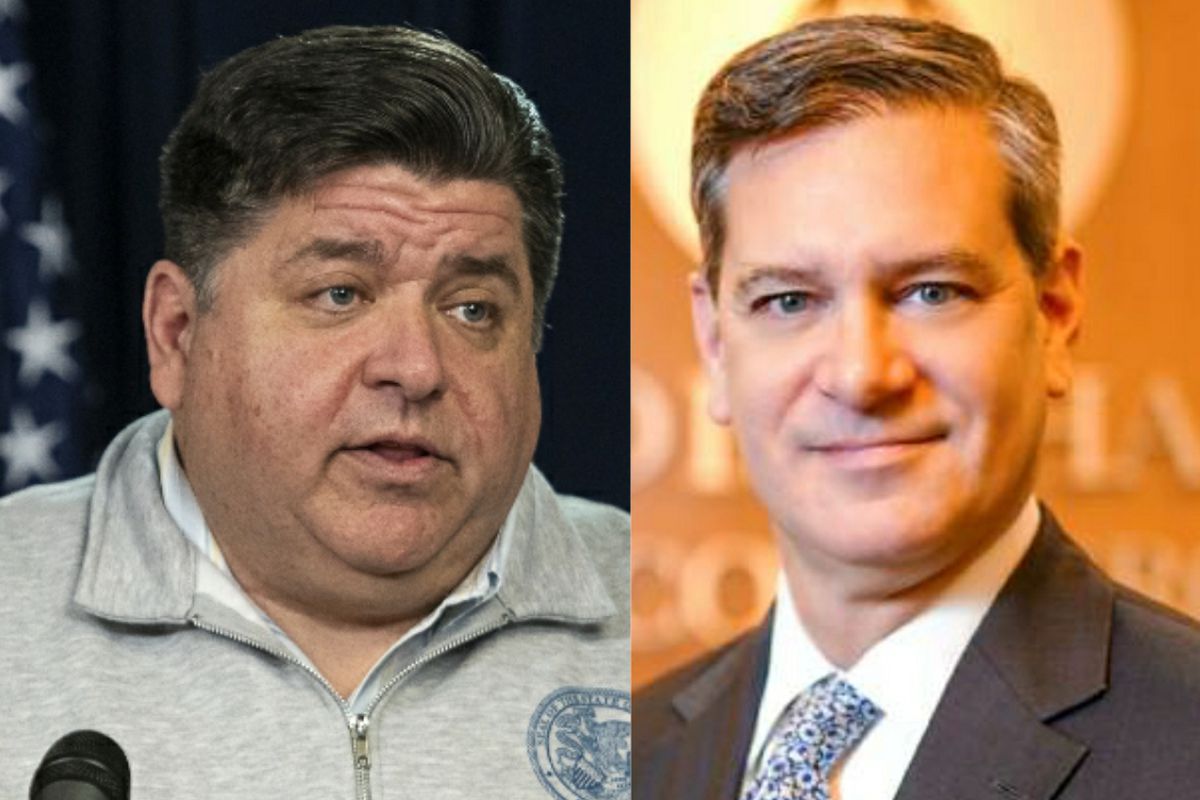 Bankrolled by an astounding $51.5 million contribution from Gov. J.B. Pritzker, a committee pushing a graduated income tax ballot initiative launched a series of digital ads on Tuesday — just as an opposing group announced grassroots efforts to fight the tax change that would pound high-income earners in the state.

The high-stakes awareness campaigns come four months before voters will decide whether the state changes its income tax rates to more heavily tax those who make over $250,000.

To Pritzker, a billionaire whose own income will be impacted by a change in the income tax structure,
Read more »
at July 07, 2020 7 comments: 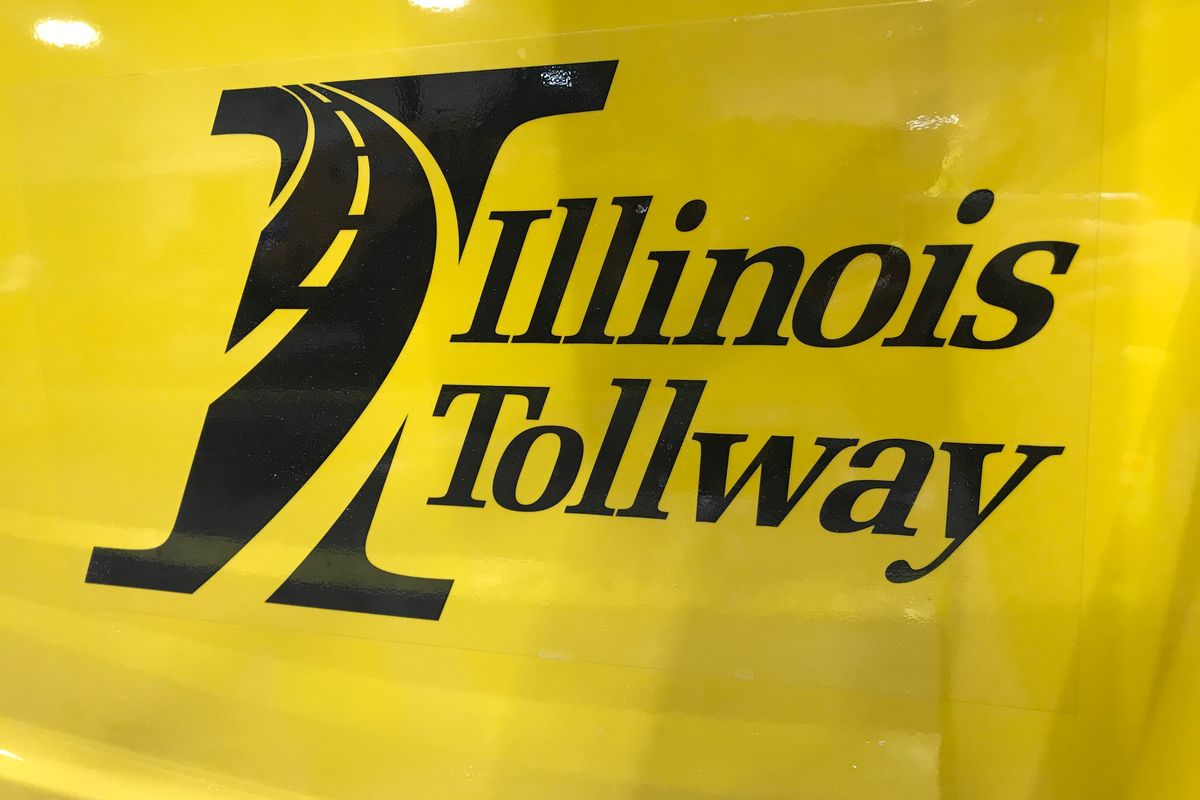 If you’re one of those people who has racked up thousands in unpaid Illinois Tollway fees, you’re about to get a big break.

And even for the lesser scofflaw, there are savings to be had under Tolling 2020, a “tolling reform” package unveiled this week.

“These changes are long overdue. Pursuing hefty violations is a costly process, and both the Tollway
Read more »
at June 26, 2020 2 comments:

Layoffs, tax hikes possible as Cook County braces for one-two punch of budget holes for this year and the next

Seventy positions have already been cut, and about 35 people laid off at the county’s health system over the past week, Andrea Gibson, Cook County Health’s interim chief business officer, said Thursday. 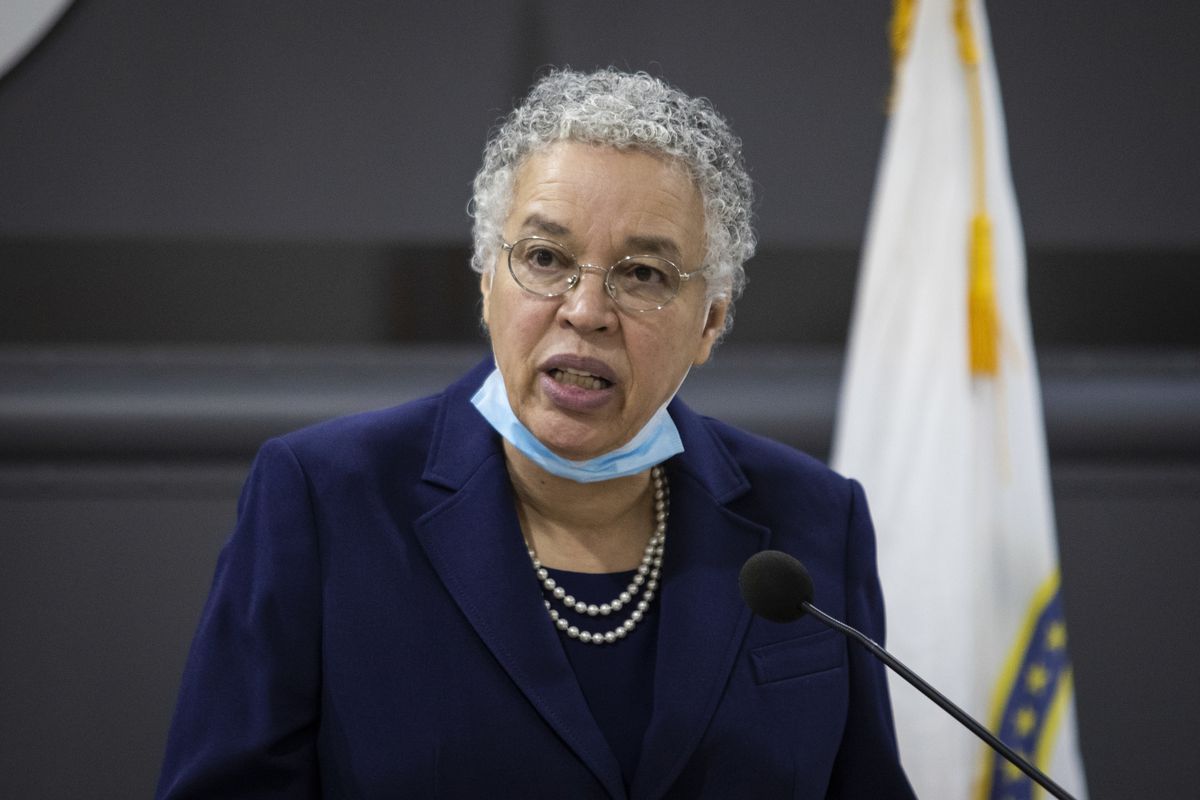 Cook County Board President Toni Preckwinkle said Thursday “everything is on the table” as county officials brace for a budget gap the COVID-19 crisis has stretched to nearly $281 million for the rest of
Read more »
at June 26, 2020

As somebody said, there is going to be a reckoning 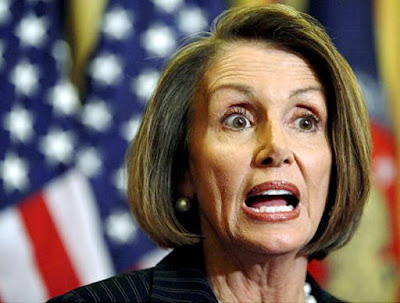 likes chaos
It's all about bailing out state pension plans and other wish list things but the effect will supercharge the inflation rate.  Imagine how good that pension plan is going to be with 25% annual inflation, every year.

WASHINGTON (AP) — Democrats have powered a massive $3 trillion coronavirus relief bill through the House, an election-year measure designed to brace a U.S. economy in free fall and a health care system struggling to contain a pandemic still pummeling the country.

Friday’s 208-199 vote, with all but one Republican opposed, advances what boils down to a campaign-season display of Democratic economic and health-care priorities. It has no chance of becoming law as written, but will likely spark difficult negotiations with the White House and Senate Republicans. Any product would probably be the last major COVID-19 response bill before November’s presidential and congressional elections.

The enormous Democratic measure would cost more than the prior four coronavirus bills combined.
Read more »
at May 16, 2020 6 comments:

A Better World Is Emerging

How is all this going to end?

The Great Myth of “Small Government”

“At this point,” says a New York Times editorial column, “even many Republicans acknowledge that the era of small government is over.”
We have no doubt they do. But how can an era end… if it never began?
No Republican in current practice has lived one day in an era of small government.
To visit one he must first climb into a time contraption…
He must then dial the knobs past the Great Recession, past the Patriot Act and the
Read more »
at May 07, 2020 No comments:

This “Cure” for the Economy Could Kill It

The economy remains under lockdown, although some states are beginning to relax restrictions. As with so many other aspects of American life, there’s been a red state/blue state divide.
Red states are generally more willing to reopen their economies, while harder-hit coastal blue states are generally more reluctant to open theirs.
Regardless, the economic consequences of the lockdown have been devastating, and we’ll be feeling their effects for a very long time. We’ll also be feeling the effects of the massive monetary and fiscal responses to the crisis for a long time.
There are so many government “stimulus” programs underway to deal with the New
Read more »
at May 06, 2020 No comments:

This time it's different

This Isn’t Just Another Crash

Like addicts who cannot control their cravings, financial analysts cannot stop themselves from seeking some analog situation in the past which will clarify the swirling chaos in their crystal balls.
So we’ve been swamped with charts overlaying recent stock market action over 1929, 1987,2000 and 2008 — though the closest analogy is actually the Oil Shock of 1973, an exogenous shock to a weakening, fragile economy.
But the reality is there is no analogous situation in the past to the present, and so all the predictions based on past performance will be misleading. The chartists and analysts claim that all markets act on the same patterns, which are reflections of
Read more »
at May 05, 2020 No comments:

Politically, the Depression worked for the Democratic Party like no other event in history.

After the Crash of 1929 under Herbert Hoover, the GOP held the House and Senate for only four of the next 50 years.

As of April 30, the coronavirus pandemic has killed 61,500 Americans in two months and induced the worst economic collapse since the Great Depression.
And if history is our guide, the economic crisis, which has produced 30 million unemployed Americans in six weeks, may prove more enduring, ruinous and
Read more »
at May 05, 2020 No comments:

This is not over

Under half of all working-age Americans will collect a wage next month.
This we learn from Mr. James Knightley, ING chief international economist.
A portion of them have received — or will receive — $1,200 from the United States Treasury.
But $1,200 does not extend very far. And our men inform us that only 15% of federal assistance is emptying into pockets of “everyday” Americans.
The remaining 85% charts a course for Wall Street… and large business.
Perhaps the percentages should run the other way.

The Value of Bankruptcy

A string of corporate bankruptcies would teach a lesson. A severe lesson it would
Read more »
at May 01, 2020 1 comment: