Was she fired for talking to the FBI?

BUMPED UP: Letter from David Grossman does not explain the why, because he doesn't know why. He is speculating, wondering what went wrong.

It is with deep regret that I tender my resignation from the Cook County Board of Ethics, effective February 26, 2020. It has been a great honor to serve on the Board since you first appointed me in
March 2016.

When I first began my service, I was honored to be in the company of Margaret Daley, Juliet Sorenson
and Executive Director Ranjit Hakim. Later, the Board added two additional members of great integrity, Thomas Szromba and Von Matthews. I believe that we were doing an excellent job of enforcing and strengthening the ethics ordinance of Cook County.

Last Tuesday, I was advised that you have elected to terminate the services of Margaret Daley, the Chairman of the Board of Ethics. You did so without so much as even doing Chairman Daley the courtesy of a phone call. I can only surmise that your action was the result of 1) Chairman Daley’s support of Lori Lightfoot in the past mayoral election, 2) the hard line the Board of Ethics has taken with regard to violations of the ethics ordinance by your friend, Joseph Barrios, and/or 3) the latest recommendations of the Board of Ethics to strengthen the existing ethics ordinance, which, among other things, brings it more in line with the serious effort by the City of Chicago to strengthen its own ordinance.

In light of your action, it is clear that you do not welcome a Board of Ethics that is serious about its duties. As such, it would simply be a waste of my time to continue in my role with the board. As of February 26, 2020 you are free to fill my vacancy with someone more likely to do your bidding.

WHO IS MARGARET PEGGY DALEY AND WHY WAS SHE FIRED BY PRECKWINKLE?

Peggy Daley specializes in conducting complex investigations on behalf of boards of directors, senior management, outside counsel, and regulators. Her work includes high profile investigations and compliance initiatives on behalf of higher education institutions, financial institutions, and healthcare providers and manufacturers. She is a nationally recognized data analytics expert and has led high profile cyber security and trade secret theft investigations. She has testified at regulatory and sanctions hearings and also serves as an expert witness in matters relating to fraud, data privacy, data analytics, TCPA compliance, and data security.
Ms. Daley is a frequent lecturer on topics of data privacy, data security, fraud, and intelligence gathering. Her investigative team has been named "Best of Chicago for Global Risk & Investigations" by the National Law Journal. Who's Who Legal has named her as one of a limited group of Forensic Investigations Experts from 2014-2017 and noted that she is "one of the most highly respected nominees in our research overall."
Ms. Daley’s compliance work includes designing and implementing employment outcome reporting protocols for all US law schools on behalf of their accreditor, the American Bar Association. She has also investigated whistleblower claims on behalf of large public universities relating to misreporting data to accreditors and unethical behavior of university leadership.
Ms. Daley is very experienced in matters relating to government ethics. She currently serves as the chairman of the Cook County Board of Ethics, which oversees the governance of the Cook County Ethics ordinance over the 22,000 Cook county employees and officeholders. She also serves on the state board overseeing the licensing of private detectives and security professionals. She is Life Trustee of the Better Government Association, where she previously served as the Chair of the Board of Directors.
Ms. Daley received her JD cum laude from Boston University School of Law and her BA from the University of Michigan. She is a Certified Anti-Money Laundering Specialist (CAMS), a Certified Information Privacy Professional (CIPP), and a Certified Fraud Examiner (CFE).

County Ethics Board departures prompt charges of politicking, grandstanding and political stunts
The dust-up involves Cook County Board President Toni Preckwinkle’s decision to replace Margaret “Peggy” Daley as chair of the Cook County Board of Ethics. That prompted board member David Grossman to step down. 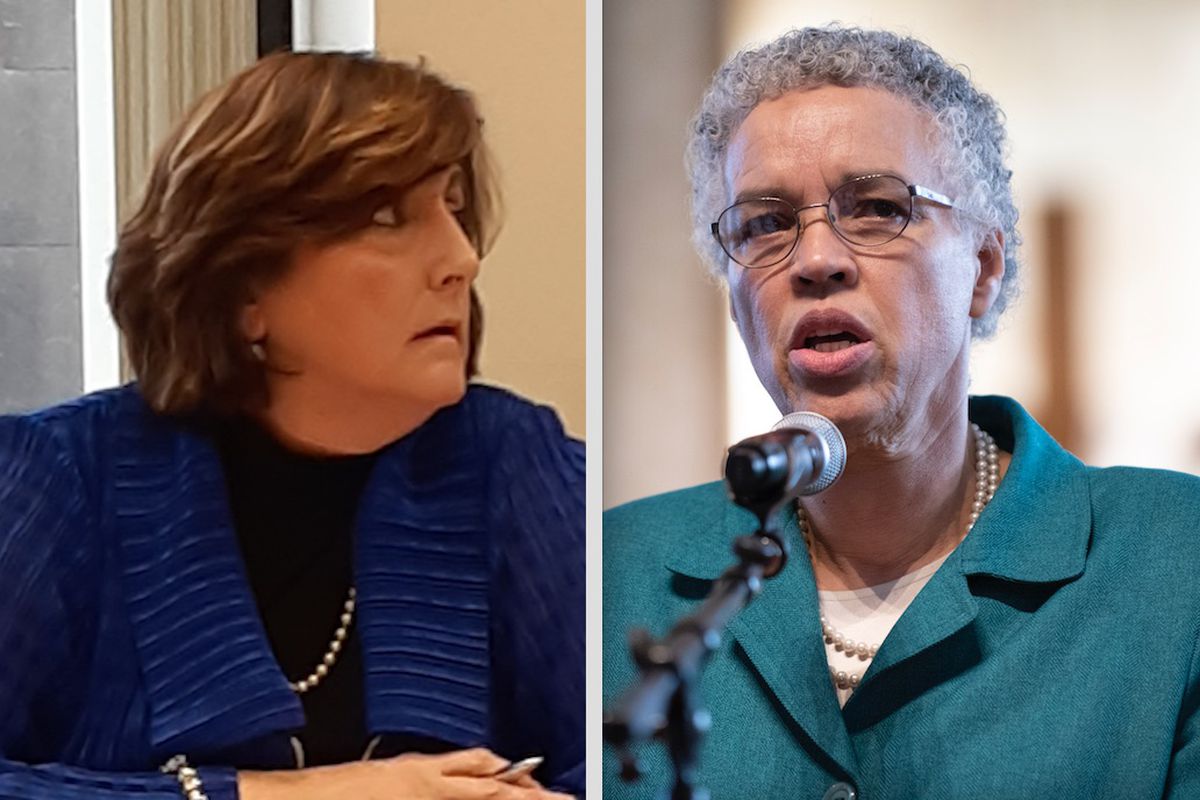 A panel entrusted with trying to enforce ethics in Cook County politics found itself facing an ethical flap of its own on Thursday, as its chair was ousted and a colleague stepped down, arguing members were being penalized for their political leanings.

That prompted board member David Grossman to step down on Thursday, contending that Daley was targeted because she had contributed to Lori Lightfoot’s successful mayoral campaign last year, as did Grossman.

Preckwinkle lost to Lightfoot in the April runoff.

And Grossman says that’s what led to Daley’s ouster as he announced his own resignation.

“I’m retired, I’m 70 years old, every minute is precious to me, so to waste it on working with, you know, the president is just not the best use of my time,” Grossman said.

Preckwinkle’s spokesman pointed the finger back at Grossman, suggesting he was the one injecting politics into the matter.

“The irony today is that some Ethics Board members have opted to grandstand and insert politics rather than focus on good government work and ethics reforms – a President Preckwinkle priority,” spokesman Nick Shields said in a statement.

For her part, Daley said she was surprised to learn she was being asked to leave the board, but said she does not think her donations to Lightfoot played any role.

“I don’t think that’s the story at all, and my colleagues, who also made donations, are still on the Board,” Daley said.

Daley made two donations totaling $4,500 to the Lightfoot campaign. Grossman donated $4,750 to Lightfoot’s campaign, and Juliet Sorensen — whom the board voted Thursday would succeed Daley as chair — donated $200 to the mayor’s campaign.

Daley pointed out that it was Preckwinkle who originally appointed her to the board and has the right to remove her. Preckwinkle sent a letter to Daley last week, telling her that her term on the board of ethics had expired and that Preckwinkle had found a replacement.

“You open up your mail and you’re like — oh,” Daley said of her reaction to the news.

Preckwinkle nominated Susan Gaffney, an associate professor at Governors State University to take Daley’s slot as a board member on Feb. 26.

Newly installed board chair Sorensen said she did not know whether politics was behind Daley’s exodus.

Berrios sued the Board of Ethics in 2018 after it fined him $41,000 for accepting campaign contributions exceeding legal limits.

The Board of Ethics enforces the county’s ethics code and investigates complaints made against county officials.

On Thursday, the first meeting after Daley received the news she would be gone soon, the board approved its recommendations for a change in the county’s ethics ordinance.

That included a ban on outside employment for Cook County commissioners and other elected officials, adding sexual harassment to the ethics code and removing the ability for the state’s attorney to settle ethics lawsuits without the approval of the Board of Ethics.

In a statement she read at the beginning of the meeting, Daley specifically challenged Preckwinkle to support the proposal to prevent Cook County elected officials from having outside employment.

“I know that President Preckwinkle stated during her campaign for mayor of the City of Chicago that she supported banning outside employment for alderman and other elected officials,” Daley said. “I hope that she supports a similar ban for Cook County Commissioners, as this is what we recommend.”

The board unanimously passed its recommended changes, but they still need to be approved by the Cook County Board of Commissioners — a number of whom hold other jobs.

“Just the attitude that the president has shown here doesn’t give me confidence those recommendations are going anywhere,” Grossman said.

Shields said the board only gave the president’s office about three weeks to respond to the proposed changes.

“The President’s office has simply not had sufficient time to adequately review the technical issues with a legal lens that would amount to considerable change to existing policy,” Shields said. “This was not a collaborative process but rather an unfortunate public political stunt.”

I get the feeling we are going to be hearing more about the Cook County Ethics Board soon. The Ethics board is rearranged while the FBI is investigating corruption at Cook County? Come on.
at January 23, 2020